Reports at the time claimed these were drones, slightly bigger/better payloads than hobbyist drones, but not sophisticated weapons.  Geostrategy Direct (paywall warning) has a very different take on this, as excerpted on Free Pressers.


On Sept. 14, 2019, Iran attacked Aramco oil facilities in Saudi Arabia with cruise missiles. However, the Iranian cruise missile used in the attack was previewed in a Feb. 17, 2018 Iranian TV report from Imam Hossien University, shown next to Chinese missile designs.

CASIC has a longstanding record of cruise missile sales to Iran. 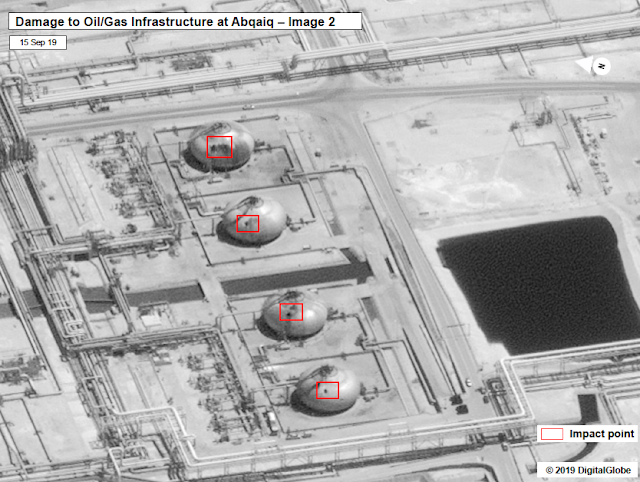 This view of the damage at the Saudi Abqaiq facility.  These are Liquified Natural Gas storage tanks, and each has puncture in essentially the same spot.  Despite last weeks' Iranian attacks on Iraqi facilities showing extremely poor results, they can clearly hit targets precisely when they want to.  Defense Update reports.


The damage from the September 14 attack seems to be caused by a small explosive shaped charge, (guided weapons?) rather than large cruise missiles such as the Soumar. The Iranians do have small, stealthy suicide drones that can cause such effects or drones that carry multiple PGM that would cause this damage. However, flying such drones over this protected site would be extremely difficult. Photo: DigitalGlobe.

The truth is probably not a question of small drones vs. cruise missiles, it's probably both.  The Geostrategy Direct column's emphasis is that Iran isn't acting completely alone as the agents provocateur in the middle east; Iran is teaming up with China.


China has used disinformation to conceal its role in promoting conflict with Iran in the wake of the spike in Persian Gulf and even global military tensions following the Jan. 3 American drone strike in Baghdad, Iraq, that killed Iranian Quds Force commander Qasem Soleimani.

Two days later, on Jan. 5, Chinese state media organ Global Times stated: “China won't use proxy warfare in the Middle East or coerce countries in the region to choose sides. China's joint naval drill with Russia and Iran is not an attempt to seek its sphere of influence, pursue military expansion, or fight against other countries in the region. China is seeking amity with all Middle Eastern countries, engage in cooperation with them and contribute to regional security.”

These claims are all false; since the 1980s China has been a principle backer of Iran’s radical Islamic regime, providing decades of military technology and assistance, while becoming the principle source of foreign revenues as the largest customer for Iran’s petroleum. Iran, in turn, gives Chinese weapons to terrorist groups in Lebanon and Yemen, which respectively, are fighting Israel and Saudi Arabia. 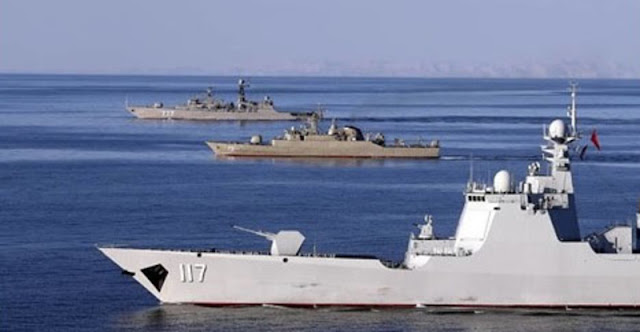 China claims to be seeking ‘amity with all Middle Eastern countries’ but starting on Dec. 27, 2019 it sent a major Chinese Navy warship to exercise with Iran’s Navy, showing clear support for Iran.  Free Pressers photo.

It seems to be common belief that this was an attack that the Houthi rebels in Yemen carried out - with the implication that it was unsophisticated, and that any determined street gang could duplicate it.  It wasn't.  It was disguised to look like that - if one doesn't look too closely.