It took them a couple of days to get the weather acceptable for launching the Crew Dragon abort test, but the mission went off without a hitch at 10:30 EST this morning.  The original schedule was for 8:00 AM yesterday (“no earlier than...”) but that was cancelled due to the strong winds not easing, as was forecast Friday.  The test was rescheduled for this morning at 8:00 AM and then rescheduled for 10:00, then 10:30.  Since it's a suborbital test, the launch window wasn't critical and extended to 2:00 PM.  On the plus side, the weather allowed them to test the system at the limits it would ever be allowed to fly in, including splashing down in rough seas.

We were still socked in by clouds, only catching a glimpse or two of the Falcon 9 booster during it's 1:37 second lifetime.  We came back in and watched the test unfold on SpaceX's feed on YouTube.

This is a screen capture from their video, showing virtually the moment that the F9 is shutdown and the Crew Dragon escape rockets fire. 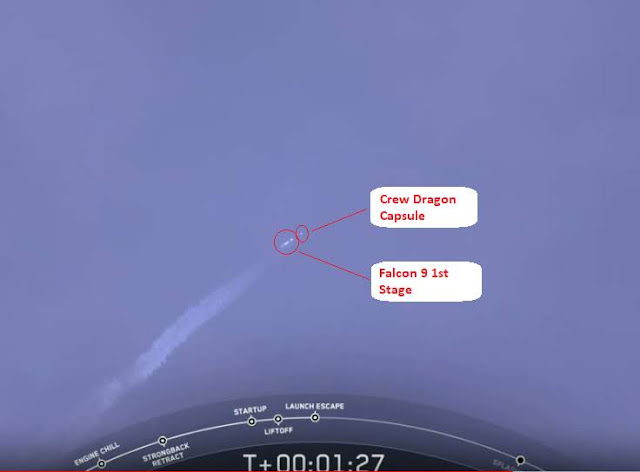 Ten seconds later the F9 booster exploded - this was expected to happen, but was dramatic to see. 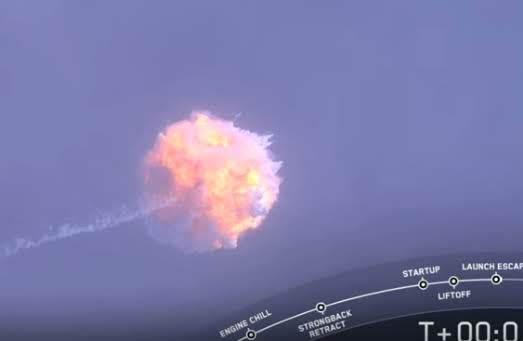 The post-test press conference declared that all objectives have been met.  That was the last test involving the full vehicle, but there are still some tests required before the system will be pronounced flight ready and a manned mission to the ISS would be allowed.  Those sound like isolated hardware tests, parachutes and some other systems, which should go more quickly than full system tests requiring launches of the Falcon 9 and Crew Dragon.

The post-test conference is optimistic that the first Crew Dragon flight from the KSC to the ISS will happen this year, probably in the second quarter of the year; that is, before summer.  That will be the first manned launch from US soil since the final flight of the Shuttle Discovery in 2011.