When I hear the term concept car, I think it's a test bed for a group of undeveloped technologies, but a group that the car makers' most forward-looking, system architects think are likely to be used in their cars no sooner than three to five years out.

This year's Consumer Electronics Show (CES), pretty much the leading indicator for at least the next year in consumer electronics, was held last week, the 7th to 11th, in Las Vegas.  The usual tech web sites, like c/net, covered lots of details from the show, but an article in Electronic Design on some concept cars caught my eye.  Mainly because I look at them and say, “just what is the concept?”  For example, here's the Mercedes Benz concept: 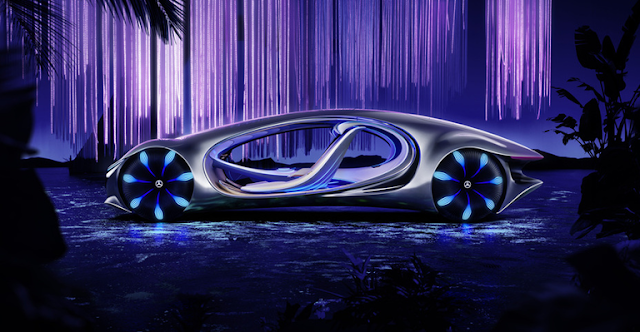 I didn't think this at first (I think my actual first thought was, “WTF??”) but they say it's inspired by James Cameron’s “Avatar.”  It's called the VISION AVTR.


The interior and exterior have an “inside-out design structure” with its stretched "One Bow." It does not have a conventional steering wheel. Instead, a multifunctional, curved, touch-activated center console supports a project menu selection interface.

The car is supposed to use an organic, graphene-based battery technology that uses recyclable materials instead of rare earths and metals. Hey, it’s a concept car.

The vehicle also has 33 "bionic flaps" on the back that are “reminiscent of scales of reptiles.” The front and rear axles can move in the same or opposite direction, allowing the VISION AVTR to move sideways by about 30 degrees in a so-called "crab movement."

Of the four cars shown, this is the most surrealistic.  My reaction to the car, thinking about sitting in that seat, forced into that position, with see-through doors that would offer no protection from a side collision was, “Nope.  Nope.  Nope.”

Sony (of all companies) presents a pretty normal looking car, rather full of cameras and other electronics more associated with Sony than cars.  There's a dozen cameras in the Vision S.


There are plenty of other sensors as well, including a dozen ultrasonic sensors, five radars, and three solid-state LiDARs. One might scoff at the plethora of sensors, but this will likely be standard fare in the future of self-driving cars.

Besides the Sony, Nissan's fully-electric Leaf SUV looks like you could find it on the lot now, and the article says it's the closest to production.  Toyota's Yui, though, goes back in the direction of the Mercedes VISION AVTR but goes nowhere near as far. 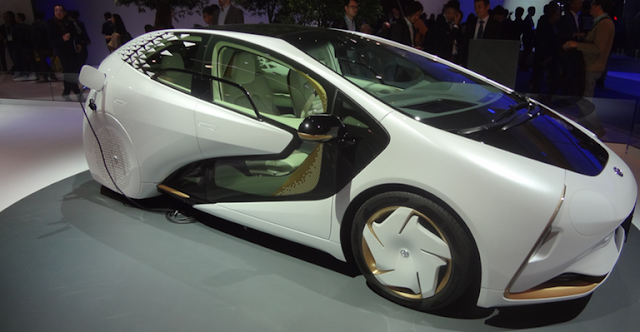 Yui is supposed to bring a “warm and friendly” experience to driving.  ...

Inside there's a 3D, full-color, head-up display (HUD) along with futuristic, contour seating. The car targets SAE Level 4 driving support and includes an automated valet parking system developed jointly with Panasonic that also helped with the HUD's development. The interior also makes extensive use of embedded LED lighting from floor to ceiling. The headlights employ digital micromirror devices (DMDs), allowing for focused beams that can avoid blinding other cars and pedestrians.

Notice that the doors go back in the direction of the see-through design of the Mercedes.  Honestly, do you really want to look at the butt and thighs of the people you see on the road?  Or their garbage piled on the floor?  Do you really want the world looking at your butt and thighs through a window like that?   To be honest, they both reminded me of this plumber's ad concept. 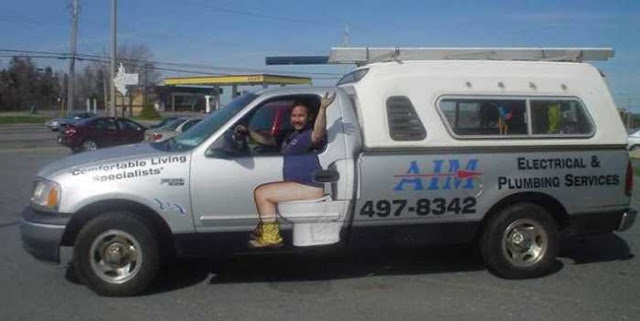 Confidential to the artists, there's only a handful of people in the world who look good in that view, and they work as models - or could if they felt like it.  And to the managers of the car companies who put the artists there, you'll get more sales by making the doors more conventional.

Overall, I'm confident that see through-cars like these are highly unlikely to make it to production.  More rational heads will prevail.  Still, I think the overarching lesson here is that artists shouldn't be let too close to the concept car line.