It's Nice to See Project Veritas Publicize the Fascist in Bernie's Stable, But...

Kyle Jurek, Iowa Field Organizer, isn't the scariest or most dangerous member of Bernie's team.  He's just, um, maybe, the most obvious fascist.  He wants to send anyone to Bernie's right to the Gulags and education centers.  Or be executed.  After all, he's quoted as saying


Kyle Jurek says liberal democrats should be placed in gulags or be put to death: “Liberals Get the F***ing Wall First.”

In big picture sense, though, he's a nobody.  All bluster and thunder and either gone by now or will be soon.  Much like the doctors who do colonoscopies, in a few weeks we'll see Kyle Jurek's name and think he's just some asshole we've seen before.

The one more dangerous than Jurek would be Dr. Stephanie Kelton, Bernie's senior economic advisor, who is a strong advocate for Modern Monetary Theory.   Modern Monetary Theory is a recipe for hyperinflation and destruction of the currency.  We've seen this movie before.  Countries like Zimbabwe, and today's Venezuela come to mind.  Let me borrow a Tweet from Dr. Kelton that I've used before: 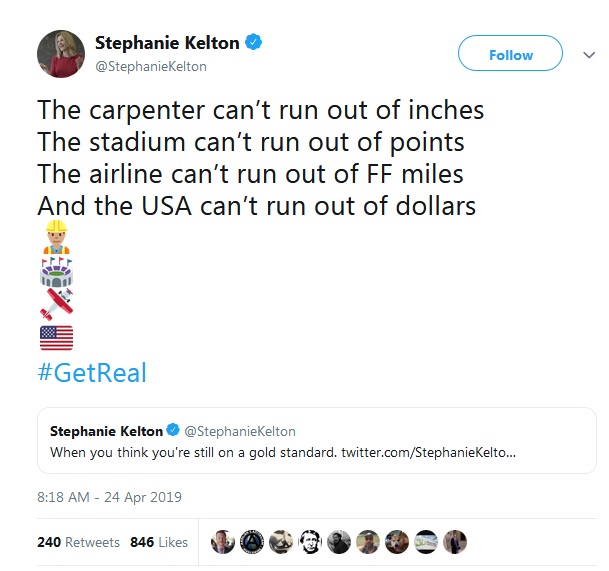 Kelton and the other MMT always cite these bad analogies.  Is it stupidity, dishonesty, or are they just expecting anyone reading it to be stupid?
All of these MMT theorists cite illogical lines like this; they confuse numbers with numbers of real things.  Numbers are infinite; resources aren't.  If the carpenter tried to build with more inches of wood than they had bought, they couldn't do the job.  If an airline offered more miles than they could redeem, they'd lose customers.  And if a country created more money than its economy could possibly justify, its money would mean nothing and be worth nothing.

In a way, the MMT theorists are like Marvin the Paranoid Android in the Hitchhiker's Guide to the Galaxy.  They've got “a million ideas. They all point to certain death.”