Solar Cycle 25 Seems to be Awakening


The two new sunspots, designated as NOAA 2753 and 2754, were seen on Dec. 24 by NASA's Solar Dynamics Observatory — a satellite that monitors the exterior and interior of the sun from a geosynchronous orbit more than 22,000 miles (more than 35,000 kilometers) above the Earth's surface.

Those two spots were gone the next day.  Switching to the ARRL Propagation Bulletin for this week:


A single new Solar Cycle 25 sunspot appeared over the past week, January 1 through January 8. NOAA did not record or number the new spot until January 2, but Spaceweather.com indicated it (sunspot region 2755) began on January 1.

Then another new Solar Cycle 25 spot emerged on Thursday, January 9 with a daily sunspot number of 14. I was excited to see Spaceweather.com post "Solar Cycle 25 Continues to Intensify."

Today's sunspot number is still 14 - the leading 1 means one group.  The first two spots, from Dec. 24th, are shown here circled in visual and what appears to be Hydrogen Alpha light (infrared): 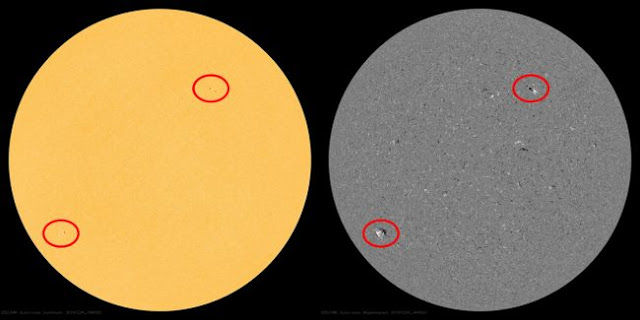 How do we know they're not from cycle 24?  Two ways: first, as the solar cycle progresses, spots converge on the equator and nothing shows up as far north or south as these two.  Second, the magnetic polarity of the spots can be measured from the earth (yes, we're in the sun's magnetic field and can measure that from here, 93 million miles away).

This diagram illustrates the polarization. 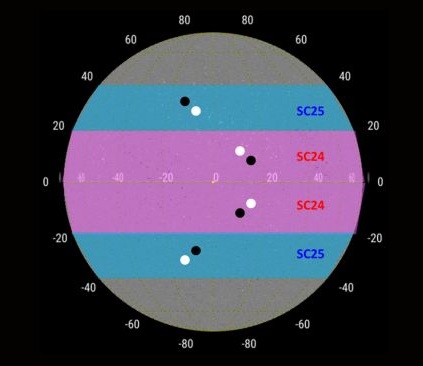 This image illustrates the old cycle spots being clustered near the solar equator and the new cycle spots being farther out in latitude.  Black and white represent the magnetic poles being flipped in each hemisphere from the older cycle spots.  (Image credit: Jan Janssens/STCE)

If you're an optimist, you're likely to say, “wow, four new cycle sunspots just since December 24th - this new cycle is really cranking up!”  The other view point is “gee, those are really pretty weak, and the first two were there one day - very short-lived - we've got a long way to go.”  Think of this as solar weather, and just as we differentiate between weather and climate here, whenever it's unusually hot or cold, my tendency is to think it doesn't tell us very much at all other than that we're in the interim between cycle 24 and 25.

These were weak spots, with very little spread on the disk and no complexity.  Solar Flux measured at 2800 MHz has been at nearly quiet sun levels, a few points better than during the quiet sun last month.  Radio propagation has been largely unaffected so far.  There's nothing here to say the sun is going wild or shutting down.  It's just the time when both cycles can be seen.