How The Tea Party Was Murdered

It's not often that I rerun pieces I've written in the past, but I think I have good reason.

Blog Brother Borepatch (one of those of you who got me started) put up a piece this morning auspiciously about how Charles Martel turned back the caliphate but that was really addressing what 2A supporters - especially in Virginia and other states where rights are under attack - need to do in the wake of Monday's rally against Governor Jolson Klanrobe's anti-gun antics (Jolson Klanrobe is the memorable name Kurt Schlicter at Townhall.com used today - paywall warning).

His punch line, repeated several times, was “Yeah, this is hard and not as much fun as a rally.  Campaigning to win is hard.”

This immediately brought back thoughts of the Tea Party and the perception it was brought down from the inside.  That's only true if you think of the inside as much broader than it was.  The Tea Party was killed by organized political operatives taking advantage of the naivety of Tea Party members.  Here's where I quote from a piece I put up in 2016, How the Tea Party Was Killed Off.  This is a lesson everyone in Virginia, here in Florida, New Hampshire, and anywhere else a rally is being held should keep in mind.  Presented here with some word smithing so it makes sense to me, the author, over 3 years later.

How the Tea Party Was Killed Off

Remember the Tea Party?  They were a political force to be reckoned with in the 2010 elections, but by the 2012 elections had been rendered ineffective.  It turns out it wasn't a natural occurrence and it certainly wasn't that they ran out of things to do.  At least according to this operative, who says he was involved, the tea party was killed off; murdered.   What killed them was the very corruption and cronyism they rose up to fight.


What began as an organic, policy-driven grass-roots movement was drained of its vitality and resources by national political action committees that dunned the movement’s true believers endlessly for money to support its candidates and causes. The PACs used that money first to enrich themselves and their vendors and then deployed most of the rest to search for more “prospects.” In Tea Party world, that meant mostly older, technologically unsavvy people willing to divulge personal information through “petitions”—which only made them prey to further attempts to lighten their wallets for what they believed was a good cause.

The tea party actually started to rise during the last years of the W; so it absolutely didn't start as reaction to Obama (the reflexive reaction of the media and the left was, of course, to call the tea party racist).  Instead, the impetus was a reaction to the profligate spending along with the Iraq and Afghanistan wars.  When Obama swept into office, of course, both of those things continued.  Add in the passing of Obamacare, the only major social program in history to be voted in by one party, along with the lies that went along with it ("if you like your doctor you can keep your doctor", "we have to pass the bill to see what's in it" and more), and anger at Washington exploded.  Tea party rallies started happening.

As Peggy Noonan noted in 2010, the tea party wasn't a wing of the Republican party, as the left wing media thought, so much as a critique of it.  The tea party wasn't a national organization and it originally had little or nothing to do with the idea we saw widely displayed on signs, "Taxed Enough Already".  It was an organic uprising; a leaderless system, or starfish organization as they're called.

I don't think I get many uninformed readers here, so you know that as a rule in life, when someone talks to you with the urgency seen in those examples ("stop what you're doing"... "this can't wait"), you're being hustled.  Walk away or ignore it.  It's like the slimy car salesman who hits you with, "what can I do to get you into this car today?"

Personally, I've always been suspicious of the Tea Party Patriots and a few other groups that put themselves forward as leaders of the leaderless organization.


Today, the Tea Party movement is dead, and Trump has co-opted the remnants. What was left of the Tea Party split for a while between Trump and, while he was still in the race, Ted Cruz, who was backed by Jenny Beth Martin, co-founder and national coordinator of the Tea Party Patriots. In 2014, the Tea Party Patriots group spent just 10 percent of the $14.4 million it collected actually supporting candidates, with the rest going to consultants and vendors and Martin’s hefty salary of $15,000 per month; in all, she makes an estimated $450,000 a year from her Tea Party-related ventures.

Folks, have you ever heard of Charity Navigator?   No, they don't - can't - have a file on every group that's going to ask you for money, but it's a good place to start.  I Will Never Give a Dime to an organization that puts 10% of what it collects into its stated purpose, like the Tea Party Patriots.  That's even worse than the 13% cited for TPLF in the first quote by POLITICO.  Another good place to go is OpenSecrets.org.  You can view a group’s track record in minutes. How much goes toward candidate contributions or so-called independent expenditures, which are supposed to be spent on the candidate (though even those can be thinly veiled solicitations if the "ask" or landing page directs to the PAC and not the candidate).

I'm not going to cite the whole article, you should definitely read the whole thing, but I will leave you with the author's summary of what happened.


But any insurgent movement needs oxygen in the form of victories or other measured progress in order to sustain itself and grow. By sapping the Tea Party’s resources and energy, the PACs thwarted any hope of building the movement. Every dollar swallowed up in PAC overhead or vendor fees was a dollar that did not go to federal Tea Party candidates in crucial primaries or general elections. This allowed the GOP to easily defeat or ignore them (with some rare exceptions). Second, the PACs drained money especially from local Tea Party groups, some of which were actively trying to grow the movement electorally from the ground up, at the school board and city council level. Lacking results five years on, interest in the movement waned—all that was left were the PACs and their lists.

It's really common to hear people complaining about what a corrupt place DC is (you've heard "Den of Criminals") is.   I say that and think that.  I didn't know anything compared to what's in that article.  To grab a quote from Walter Hudson at PJ Media, where I first saw the link to this story:


This is where our attention needs to be. This is the real establishment, not elected leaders in Washington, but a swirling flock of vultures that feed on the corpses of great expectation. 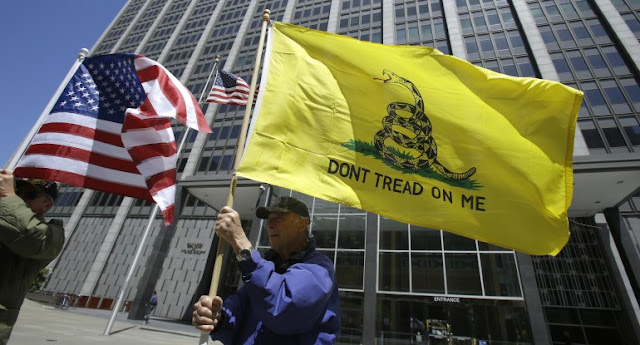 These PACs, that preyed upon Tea Party supporters like a flock of vultures feeding on an injured but still-living prey animal, are the real reason they're gone.