Count Me as “None of the Above”

I ran across an interesting little article on Business Insider about the differences between generational groups in which brands they find the most trustworthy (H/T to FEE).

For a business, creating a brand that users trust is one of the most important goals they can have and, as a side note, why I can never understand it when companies decide to alienate their customers, as so many (*cough*Gillette*cough*Dick's*cough) do.  Given that...


Data-intelligence company Morning Consult conducted 16,700 interviews per brand for almost 2,000 brands. Each participant was asked "How much do you trust each brand to do what is right?" and given the options of "a lot," "some," "not much," "not at all," or "don't know." Morning Consult's website says its trust ranking "is determined by share of 'a lot' responses."

They then present the results.  The aim of the story is apparently to say “those crazy Gen Z kids trust different brands that those old Boomer farts!  Zomg!!”  Instead, I'll try to just present results.


The survey found that the youngest and oldest consumers diverge sharply when it comes to how much they trust brands — and which brands they trust. Gen Z shoppers have an average brand trust rating of plus 10; less than the average boomer rating of plus 21.

And when it comes to the brands that they trust the most, Gen Z gravitates toward tech, ranking Google, Netflix, Amazon, YouTube, and Playstation as its top picks. Those rankings have no common ground with those of the baby boomers.

For older shoppers, the United States Postal Service delivers the most when it comes to trust. The federal mail service is followed closely by the United Parcel Service, Hershey, the Weather Channel, and Cheerios.

For their part, the age groups sandwiched between Gen Z and the boomers favor a mix of those companies. Millennials most trust Google, UPS, Amazon, Paypal, and Netflix. Gen X puts a lot of stock in USPS, Google, Amazon, Hershey, and Paypal.

I don't align with any of those groups, call me “none of the above,” although by age I'm in the “older shoppers” group.  I agree that I respect both UPS and the USPS but have no use for Hershey, the Weather Channel or Cheerios.  I'd drop those three and add Amazon from other groups' lists, but that's about it.  I don't think Google is particularly noteworthy for doing the right thing under either its YouTube or Google names.  Despite the fact that the study summary (first indented paragraph up above) said they queried about 2000 brands, they only show about 25 on their summary page (by demographic groups).

If I had to pick the top five who most often do the right thing, I'd keep UPS, USPS, Amazon and then I struggle with who to pick for the other two.  Contenders would have to include Springfield Armory, Sig Sauer, Hornady, and Federal Premium.  But I could see other brands, too: Ryobi Tools, Bessey Clamps, Irwin tools, Mitutoyo measuring tools and on an on.  It would take some sitting down and working at it to come up with my top 5.

I think the reality is that surveys like this are pretty meaningless.  If you have a company, it's only worth paying for a study like this if the survey participants include your customers, or people you're trying to reach.

I'm sure if we went to people from any of those groups, we'd find others who say they don't match their age group.  It's one of my sayings around here that there's no such thing as groups.  There's only individual people. 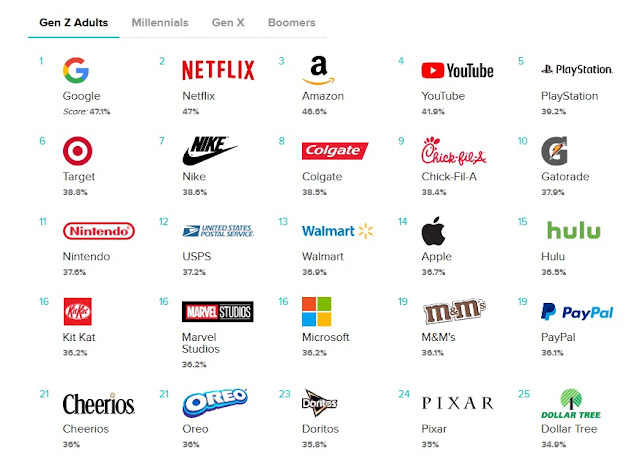 Fun fact: as you click through the group names on top, Amazon stays #3 until you get to Boomers and then it falls to #11.