This is a story I've been trying to keep up with as most of us have some interest in it.  I've been posting occasional stories on Fifth Generation (5G) cellular systems for a while now - these two, from last April and then August, will bring you up to date.

In a nutshell, the major improvements coming in 5G are all speed-related.  Everyone talks about the advertised download speeds in the 4 to even 10 gigabit/second range.  The uses projected for the "Internet of Things" or IOT depend more on the reduced communication times - reduced latency or faster networks.  The IOT and it's cousin, the Industrial IOT (IIOT), will do simple things like put water pumps, flood gates, and all sorts of civic and utility infrastructure on the net.  The vast majority of these things are not high bandwidth users and don't need the faster data rates that 5G promises but will benefit from the reduced latency.

Nationwide, there's somewhat of a competition for bragging rights of being ahead in the 5G race.  As will sometimes happen, things aren't always honest when marketing gets involved in these competitions and some of what's really deployed isn't as much of an upgrade as is being sold.

The wireless industry has long responded to a lack of... well, guys like me: graybearded Radio Frequency (RF) designers - with lots of training and product integration help to enable the newbies to put together systems without ruining things (as much).  One of the big names in the training industry, Les Besser Associates has apparently teamed with a long-established electronics hardware seller call Pasternack Electronics and been publishing some articles on trends in the industry.

Here I have to apologize for not keeping the required links, but I have a downloaded PDF from Pasternack which I got in December entitled “Updates on Millimeter-Wave 5G (Part 2)” which says that the bands where the biggest speed improvements should be expected, in the millimeter wavelength spectrum from 24 to 25 GHz, aren't there yet.  Nobody is deploying these mm wave systems.  The author puts it this way:


Early 5G build-outs and tests all appear to be sub-6 GHz (mid-band) or low-band (sub-1 GHz), with only hints that some wireless operators may use mmWave spectrum alongside sub-6 GHz in select urban areas of the future. For example, Verizon’s early 5G deployments in Minneapolis and Chicago only offer sub-6 GHz 5G, and, though impressive, are only suggested to reach average speeds to 450 Mbps. There also appear to be substantial service issues with Verizon’s 5G, where service is spotty and far from full, or even adequate [3].

In that linked reference, a writer for Tom's Hardware goes to Chicago to test the Verizon 5G deployment in the city.  It's a good improvement over his LTE or 4G phones, but surprisingly found his LTE phones downloaded a game twice as fast as his 5G phones.  Less surprisingly, speeds were variable as he moved around the city.  At best he was getting around 600 megabits per second.  That's good, but far short of the promised 5000 Mbits/sec (usually written as 5 Gbits/sec), and the spotty service left him with speeds well under that in places, with a low of 163 Mbits/sec.  The physics of the system is going to make it hard to eliminate the changes in bit rate with small movements.

There's what I consider an ugly truth here.  Nobody on earth really knows how to deploy a network of mm wave, two-way, datalinks with multiple radios, each one bearing multiple input/multiple output (MIMO) antenna interfaces.  There are people experienced with mm waves in the 24 to 25 GHz range; there just aren't thousands of them.  I have no doubts they'll be able to make it work but it will take more blood, sweat and tears than planned.  For me the bright side is that by the time the 5G networks make it here to Smallville, just about all of the implementation problems will have been solved. 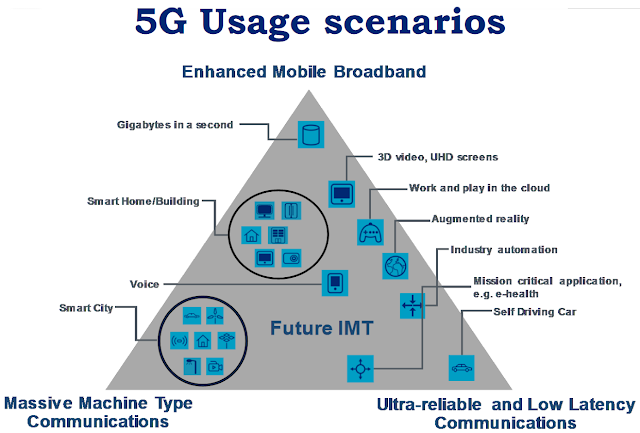 Early summary of the case for 5G improvements, from EDN Asia Magazine, 2017.