B.F. Skinner And A Million After Him Said

In plain English (translated to Redneck), you get more of behaviors you reward and less of behaviors you punish.  B.F. Skinner, of course, was the preeminent behavioral psychologist of his day.

Charlie Martin at PJ Media provides an otherwise unremarkable article but makes it clear that what we're seeing from Iran is exactly the kind of responses expected when training a lab animal.  On a night (east coast time) when missiles are raining down on Iraqi air bases that are home to American troops, it's helpful to remember the setup for this goes back a long way, not just to last Thursday.


I think there's a larger point here, something that BF Skinner showed with pigeons but that goes for people too: when you reward a behavior, you get more of it.

Looking back over the last 10 years, we've seen the Obama Administration ignoring Iranian provocation to get the "Nuclear Deal", sending them billions of dollars in cash — and releasing this same Soleimani from previous sanctions, something John Kerry tried to explain by saying it wasn't this Soleimani, but another guy of the same name (which was a lie by the way), and then ignoring blatant violations of the agreement they were so proud of making, while Iran continued to attack the Iraqi government and kill civilians.

When you reward a behavior, you get more of it. And we have: since the Obama deal, Iran has increased its military budget using the money the Obama deal supplied; support for terrorism has actually increased.

Of course, this is what we'd expect: we keep rewarding the Iranian government, they keep doing what gets them rewarded.

Skinner noted that negative reinforcement (punishment) would work to discourage a behavior but it has to hurt, or at least be unpleasant.  The US in particular and the international community in general has been rather weak at administering negative reinforcement.  From stories in the media, Soleimani had grown accustomed to doing anything he wanted.  He was the Instagram Selfie terrorist leader.  He fully believed either we couldn't or wouldn't do anything to him; in a word, complacent.  There's a story that a recent defector from his Quds force (Quds is their word for Jerusalem) brought piles of documents on what he was up to.  While they say surveillance went up, intelligence probably knew his location at all times for a while. 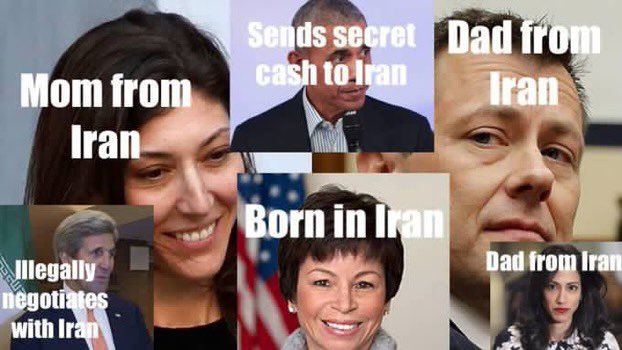 I only know three are true off the top of my head: the ones involving Obama, Valeri Jarrett, and John Kerry.  Lisa Page, Peter Strozk, and Huma Abedin are new to me.