Convergence of a Couple of Ideas - Neither of Them Newsworthy

Just two ideas that have come up this week that relate to a central lesson in life.  Too many people don't realize just how good we have it in life.

Mrs. Graybeard and I have a family tradition of having chicken wings for dinner on Fridays.  It started out that we'd have wings and watch something we had recorded during the week; last year it would have been Marvel's Agents of Shield; the year before, perhaps the X-Files.  Sometimes it's nothing like that.  Lately, unfortunately, there has been nothing to watch but we have wings anyway.  Because Friday.

A week ago, I'm finishing my last bites and something didn't feel right.  A little probing revealed the problem, I had lost a filling that was on the back surface of one of my lower front teeth.  That was a recent filling, more like 10 years than 30, but I'd be lying if I said I knew when I got it.  The important part is it wasn't a cavity and the tooth wasn't sensitive, I just had to get through the weekend to go get it fixed.

Monday morning I called my dentist.  The cheerful girl on the phone said, "when's a good time?," to which I replied, "Anytime is good."  She took a few seconds to say, "how about 1PM today?"  It was not quite 8:30AM.  Naturally, I was there.

There are no significant details to relate; the dentist said something along the lines of, "this should be easy.  No local anesthetic needed, we'll be done in no time."  And we were.  Less than hour after I sat down in the chair I was walking out with my tooth repaired.  Like all modern fillings, instead of mercury amalgam, it was UV-cured epoxy, then meticulously ground to the right size.

At some point along the way I had the thought; imagine it was a few hundred years ago.  The richest kings in the world couldn't get what I just had done, in a small city in a flyover county.  I allowed myself to think farther down that line.  Forget the richest kings in antiquity; I don't think the richest men alive 100 years ago could get a simple filling like that.

Later this week, the folks at FEE (The Foundation for Economic Education) reprised an article with the same line of thought.  The average person today has material riches John D. Rockefeller didn't have.  A February 2016 article in The Atlantic talked about life a hundred years ago and became, in turn, the FEE article.  It was life before widespread electricity, before antibiotics, before good heating systems in homes, and all of John Rockefeller's money couldn't buy it.  Travel from the east coast to the west coast in the US would take four days by rail (to most of the west coast).  Letters took days to cross the country; with no commercial aircraft there was no airmail.

Remember, in 1924 the 16-year-old son of president Calvin Coolidge would die of an infected blister that he got on his toe while playing tennis on the White House grounds.  Today, antibiotics to fight that infection are practically free.

Record players were radical new technology and horribly low fidelity to modern audiences.  Phones were wall mounted, not carried in your pocket or on your belt.

Last April, I posted part of an essay by a millennial woman writing about writing at a coffee shop.  She quoted AOC saying, “An entire generation ... came of age and never saw American prosperity.” The author concluded the complete opposite.  AOC and her cohort have never seen anything but prosperity.

I have no dental insurance which means this was a pure out-of-pocket expenditure.  Are there things I'd rather spend that money on?  Actually, no.  No, I'm happy to spend that money to get my tooth repaired - and extremely grateful to be alive in time when I can get it fixed and not have it continue to get worse.  Something John D. Rockefeller couldn't have done with all his millions. 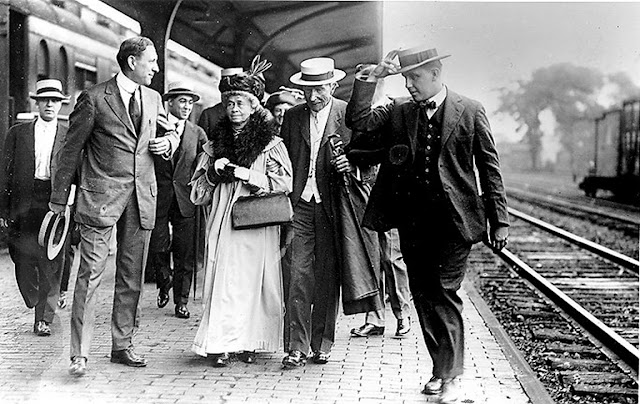