Have You Been Noticing Precious Metals?

The prices on precious metals have been a little gonzo lately, with the biggest WTFs going on over two of the lesser known metals, palladium and rhodium.

Both of these are white metals, like silver, and both have served as alternatives to silver.  The phrase, "cheap rhodium plated metal" comes to mind, but I don't think that was ever true.  I mean, both base metals and silver would be rhodium plated to give them a white luster that didn't get the black patina that sterling silver gets, but rhodium wasn't cheap.  It sold for many times the price of silver.  The only reason it had minimal impact on the price of jewelry was that tiny amounts of rhodium would be plated.  Rhodium's pricing has historically always been volatile, but at it's cheapest in the early 2000s, it would have been around $500/oz, and was frequently a couple of thousand dollars/oz while silver was in $5/oz range.  Today, rhodium sellers are asking in the vicinity of $10,000/oz.  Bidders are holding back from that, but we have to figure they're agreeing at some point, or there'd be no sales.

Palladium is another white alternative to silver that has always been several times the price of silver.  In that same period in the early 2000s that I was just referring to, palladium was “a few” hundred dollars/oz. - this was a period when I first started paying attention to precious metal prices and sort of had my financial awakening, so those numbers and relative prices are my reference points.  Today, palladium sellers were asking $2366/oz.  This Money Metals Exchange chart shows palladium's price in the last year.  You'll note that the chart seems to be divided in half horizontally, with the left half (until August) being little changed, but after that, the prices have been more steadily increasing. 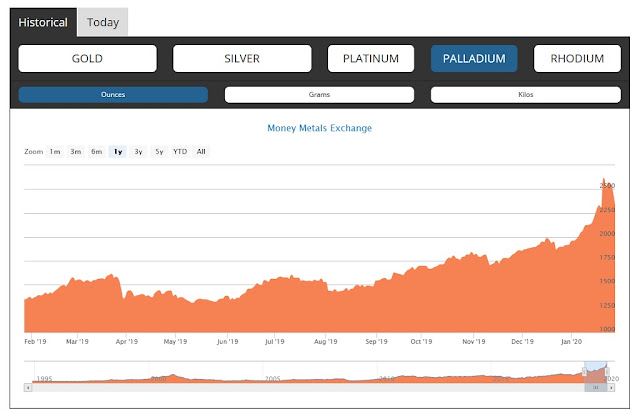 So what's going on?  Those of you familiar with precious metals as an investment might know this instinctively.  There are two main ways people invest in precious metals.  The most direct is to buy the metal and hold it; either at their home or in a safe deposit box in their bank.  The other way is by buying shares in a metal fund, frequently called an Exchange Traded Fund or ETF; that fund, in turn, will buy and hold the metal but the funds vary in how much and how often they buy the metals and how easily buyers can get metal.  There are advantages and disadvantages both ways, depending on your situation, but the story Money Metals Exchange is saying is the palladium funds have been claiming they have metal that they don't have.   Buyers are saying they want their palladium and the funds are having to pay more to get metal to deliver to their customers.


People have complained about this practice in precious metals markets for decades.

More and more contracts have been sold, but inventories of actual physical metal have not kept pace. Price discovery is broken when the paper price of metal is detached from physical supply-and-demand fundamentals.

Today, there are hundreds of paper ounces floating around for every ounce of physical metal eligible for actual delivery.

As soon as a few contract holders lose confidence in their ability to redeem the paper for actual metal, the jig is up. The rush for physical bars will drain exchange vaults quickly and anyone still holding paper when the music stops will be out of luck.

That may be happening now in the market for palladium.

Palladium and rhodium are genuinely rare - the Money Metals Exchange page says palladium is about 1/30 of the occurrence of gold and 1/15 of that of platinum.  On the other hand the Wikipedia page on abundance of elements in the Earth's crust lists two sources who provide concentration in parts per million of mass; two sources that have very different numbers.  I'll copy the few metals here (you can read the decimal numbers as milligrams of metal per kilogram of crust):

Many things go into pricing a metal and while traders always complain the market is rigged, that can only be part of it.  The cost of extracting it and the need for that metal (instead of some other metal) are the biggest factors.  Palladium, for example, is used in automotive catalytic converters (as is platinum); the industrial demand has to be a large percentage of setting the price.

Speaking of precious metals, I'm sure many of you have noticed that the Kitco spot silver price link on the top of the right sidebar is misbehaving badly.  Instead of updating almost in real time, it seems to update once a day at some random time.  I'm all but certain the problem is at Kitco.  I've gone through their options a few times, tried everything I could see and nothing improved.  I also looked elsewhere for a similar way to track prices from someone else and couldn't find anything.