I had heard of California's Assembly Bill no. 5 (AB5) as an attack on the Gig economy, but hadn't read much about it until this week.  The Foundation for Economic Education (FEE) put up a look at the bill with details I'd missed.  The law doesn't specifically prohibit freelance work, but it severely constrains it and that is putting a lot of freelancers out of work.

They start out with an example to catch a lot of people's interests, and talk about the two most popular streaming programs on TV: Disney's The Mandalorian and Netflix's The Witcher.


In The Mandalorian, the title character (nicknamed Mando) is a bounty hunter who works, and gets paid, on a case-by-case basis for specific contracts. He’s a member of a bounty hunting guild, which is not his “employer,” but rather a cross between a credentialing association and a job board.

In The Witcher, the title character is Geralt of Rivia, a monster hunter for hire who roams the Continent, clearing out dangerous beasts that threaten the lives and livelihoods of others. Sometimes the contract is offered by the local nobility, sometimes it comes directly from the common folk. Witchers also have a guild that credentials its members.

In both cases, the freelancer takes on a specific job for a short period of time and once the fugitive is found by bounty hunter Mando or the monster dispatched by Geralt of Rivia, the contract is over.  Employer and employee part ways.

That's what AB5 is outlawing.  The law redefines “employee” in a way that makes freelance work nearly impossible. While it was aimed at work arranged through on-demand apps like Uber, Lyft, and Taskrabbit, it impacted freelancing in general.  Writer Andi Loveall (@ms_andiloveall) tweeted,


They're forcing any company that hires a freelancer for more than 35 gigs a year (which is nothing, I can do that in a week or two) to hire the freelancers as employees. But my company only uses freelance writers. So I lost my ability to work there. And so did many others.

Another writer, who just goes by the name Amy (@MazingAmy) tweeted:


35 submissions a year? I have to write 80 a month to support myself.

But naturally, the wonderful state thinks they've made these peoples lives better by making them unemployed.  The reality is the law was written without the slightest care for writers like these two women.  It was written to protect cab drivers from Uber and Lyft, and wreck any other choice of working arrangements people might like.  Note the condescending attitude of the "AB5 cosponsor"


When writers who lost contracts with Vox Media told AB5’s sponsor about their troubles, the lawmaker said those “were never good jobs,” and the loss was limited to “contractors who don’t want a job.” The fact that until recently they had jobs, with the freedom to work where and when they wish and never do unpaid overtime, didn’t seem to matter.

It’s worth noting that the bill’s sponsor, a lawyer, included an exemption for her own profession and a dozen others with the political juice to get one while arbitrarily rendering all other such arrangements illegal. The real beneficiaries of the law—powerful labor unions—just cut their small-business competition off at the knees.

Of course, it's not just writers vs. Uber drivers.  Independent truck drivers, who buy their own trucks and prefer to work for themselves are also hard hit, as are musicians and all sorts of artists.  For a virtually endless stream of stories, check out the #AB5Stories and #AB5 hashtags on Twitter. 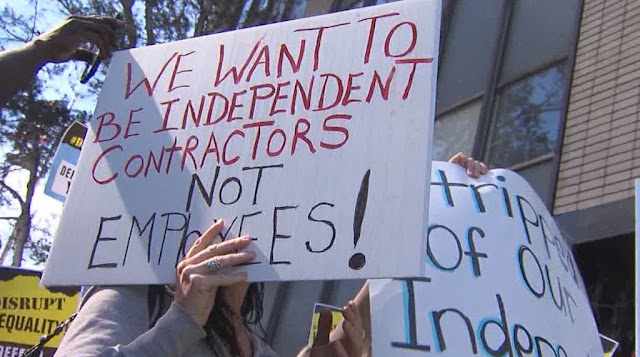