Back when I posted my semi-serious three laws of antennas, I ended up with my third law saying: whatever you can put up won't be as good as you'd like.  Unless you have a Jeff Bezos-level budget including the property to match. I've heard several people say the rule of thumb "up north" of here (which is pretty much all of the US), is that if your antenna stays up all winter, it's too small.

With that in mind let me introduce you to the hardware at Radio Arcala in Finland. 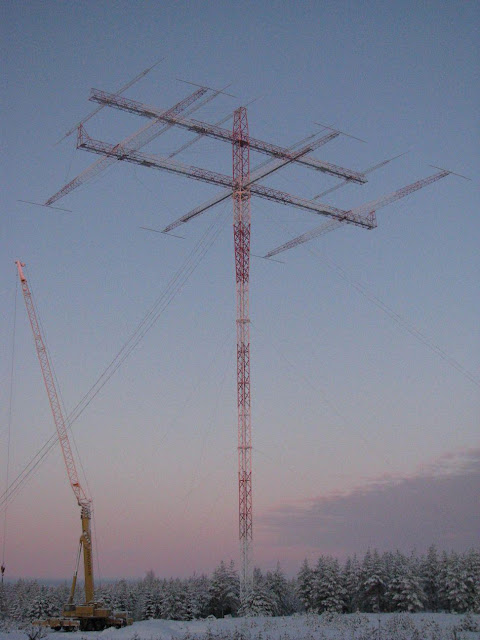 That tower is topped with two antennas (which are constructed of towers themselves): the bottom one is a three element yagi (directional antenna with gain) for 160 meters while the top is a four element yagi for 80 meters.  Now, remember, the length in feet for a half wave dipole is 468/f with f in MHz.  That says the elements of the antenna need to be 134 feet tip to tip for the bottom end of 80 meters and 260 feet for the bottom of 160 meters.   And they need to be spread out with about 2/10 wavelengths between the elements (that number varies with the antenna design; it's very approximate to give an idea of size).

According to their website, the vital stats
They add that the tower is supported by four sets of guy wires.  Each of the four extends 120 meters or 400 ft from the tower – representing an area of 170 meters (550 ft) on a side, for a needed total space of almost three hectares.  Being in Finland, it's designed to handle more than its own weight in ice buildup on the structure.  The system rotates to point the antenna at the desired part of the world; I believe the entire structure rotates, not just the top where the antennas are.  There's a video of it rotating.

To give you an idea of the scale up close, here's a section of the 160m antenna where one of the elements meets the boom that holds the three elements.  With a prop for scale. 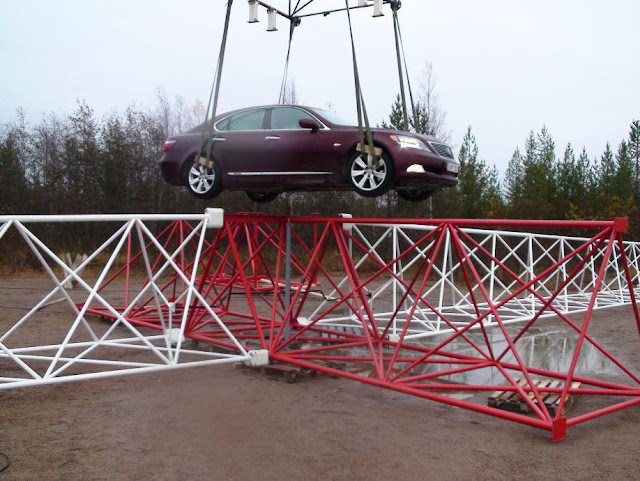 This is tower number 7 of 7 at Radio Arcala.  All privately funded, lots of volunteer work, designed and built by a group of hams who wanted the best signal in the world on those two bands.

In the comments to that video, one says, "now collapsed due strong gust wind" dated six years ago.  I guess that means it stayed up a few winters.