This Is a Bad Weekend for a Tropical Storm

As Miguel at Gun Free Zone pointed out, we're under the 5 day forecast cone for a tropical storm this weekend.  Before the 5 day cone extended this far, it was clear the path was pointed this way.  The most current forecast map just came out a couple of minutes ago as I write this: 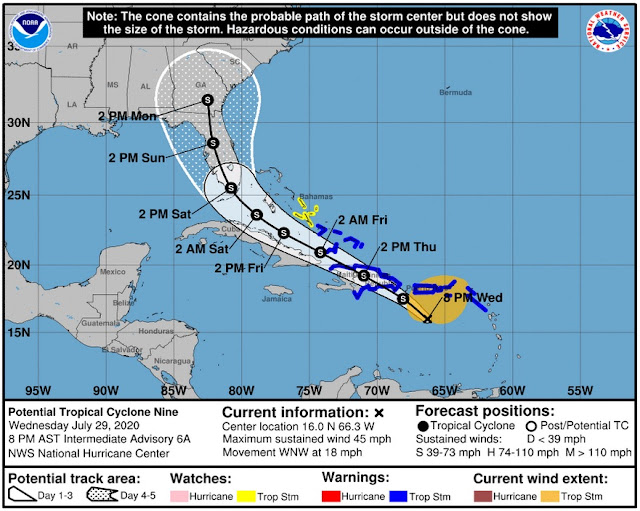 Earlier today, the model tracks were off the west coast; last night it was east of Orlando.  Now the track goes between Orlando and Tampa.  Either way those of us on the east coast around Cape Canaveral are in the uncertainty band.  This forecast map is strange looking to me.  For one thing, this is referred to as Potential Tropical Cyclone Nine.  PTC9 has winds of 45 MPH, which could qualify it as a tropical storm.   I'm not quite sure what nuance keeps them from classifying this as a tropical storm now, but I believe the system is too spread out - too big - so the circulation is too loose.  If it should become one, the name will be Isaias.  The environment is full of wind shear and that's why it will probably stay a tropical storm before landfall.

Tomorrow morning's Mars rover launch (NET 7:50 AM) won't be affected.  Even SpaceX's much-delayed Starlink-9 mission early Saturday morning (NET 3:21 AM) shouldn't be affected - the storm will be over 300 miles away, much closer to Cuba than the Cape.  Assuming the Starlink mission goes off on time and the booster is recovered, getting that booster back into port could well be affected by the storm.  Recovery drone OCISLY left Port Canaveral for the landing zone Tuesday night a little before midnight.  It takes the drones a couple of days to get back to the port which would certainly have it offshore during the storm.  I don't know what those ships are rated for.  The last time the fairing recovery ships were threatened by a tropical storm, they took shelter in a South Carolina port; the recovery ship stayed on station.

The recovery drones are unmanned virtually all the time they're offshore.  They use large motors and change the direction their huge props point to stay on station, using closed-loop position-keeping based on a GPS position.  To get to the recovery zone (based on other Starlink missions, probably off the South Carolina coast) and then get back to Port, a tug boat tows them.

The mission with the biggest risk seems to be the return of Crew Dragon 2 on Sunday.  The map of possible landing areas  I posted Monday splits possible splashdown sites around the Florida peninsula, and none of those places are currently looking good.

NASA held a scheduled review today with NASA and SpaceX people in attendance, and they're still planning for the Crew Dragon to undock on Saturday.

They acknowledge that a storm is out there, but I see no mention of the time it takes to get a ship to the proposed return site or any of those nasty details.

My take is that they should leave crew dragon on the station another few days.