When It Rains All Day, Barbecue All Night

Like millions of folks, I like to barbecue on the 4th - or any day of the week that ends in -y.  We've been having several days of afternoon thunderstorms lately, though, and the forecast for the 4th was 70% chance of rain and today was 80%.  I had a pork butt in the freezer to make pulled pork from, though, and smoking one of those takes around 12 hours - sometimes as much as 16 depending on the particular hunk of pork you're working from.  These are animals, after all, and it varies with the individual.  It looked like chances of having 12 to 16 hours without rain lasting until an evening dinner time hovered right around zero.

Yesterday, I hatched a plan to barbecue in the 12 to 16 hours between rain showers or from about 10PM Saturday night until the pork was done this afternoon.  I've done this sort of cook before, but usually starting later, like midnight or getting up at 3AM plus or minus an hour to start.  Sure enough, the rain let up to "chunky mist" before sunset last night and by 10 it was drying out (to the degree it can with humidity close to 100%).  I used my electric smoker for this, a Masterbuilt Digital Electric Smoker (like this model) and the side smoker box.  Everything was on the back porch with the pork butt in the smoker and heating up by 10:10PM.

Up for some barbecue engineering?  Doubtless you've seen pellet grills that use a motorized plunger (an auger?) to drive a calibrated amount of wood pellets in the heat chamber.  These advertise they can be run unattended - I don't have one so I don't know if that's real world or not.  The Masterbuilt side smoker is gravity fed.  The disassembled unit looks like this: 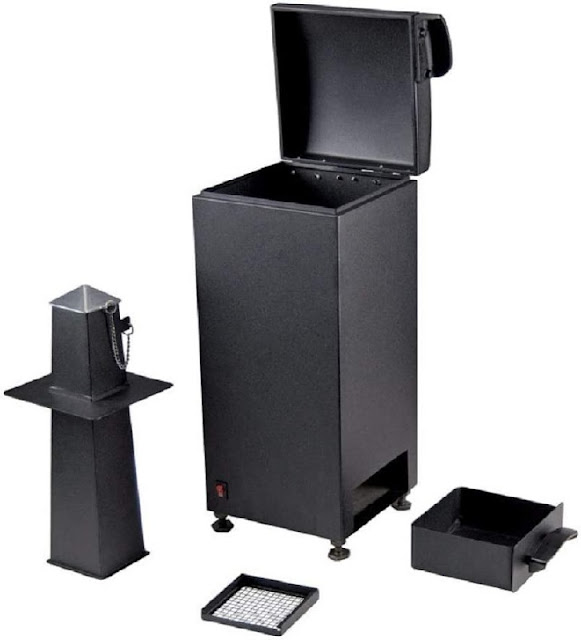 That little screen tray (bottom center) slides onto the wood chute (bottom left) which sits inside the big assembly, just above an electric heating element.  You fill that chute on the left with wood chips, the screen keeps them from falling through, they're heated until they smoke, and the idea is that as they give up their smoke, they turn to ash, which falls into the drawer (bottom right) and now gravity pulls the stack of chips lower into place so that the next layer burns.  The whole thing is supposed to provide continuous smoke for six hours, and pretty much does.   The problem is that the wood chips also release some resins and water vapor that rise inside the chute causing the chips to stick to the sides and each other, forming a clump or clot of chips that needs to be broken up every couple of hours.

Which is why I get up every couple of hours through the night to look after the smoker.  The alternative, without the side box, is to refill the limited amount of chips the smoker itself holds, which means getting up a few more times through the night; perhaps every 90 minutes vs 120 to 150 with the side box.  Practically, it's not a really big difference but the side box gives us the ability to cold smoke, which the electric smoker itself can't do.

Since I'd made preparations to be done by no later than 2PM, expecting it could be raining by then, the rain held off another two hours.  The pork came out great and a splendid time was had by all.  And tonight, Mr. Kite is topping the bill. 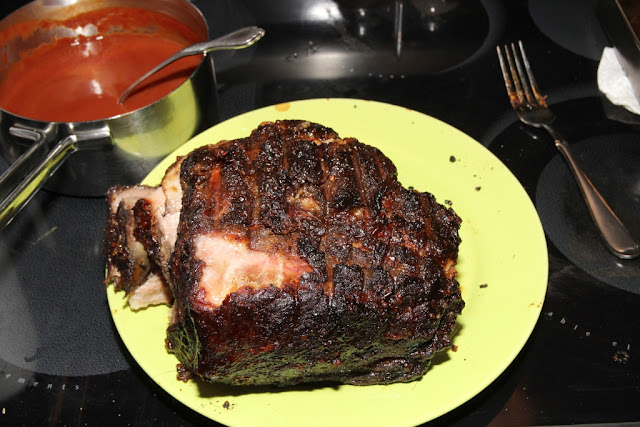