The Warmest Week of the Year

The date of the warmest week of the year depends on where you are.  For illustration, the folks at NOAA provide this graphic showing the week most likely to hold the warmest day of the year according to the long term (1981 - 2010) average. 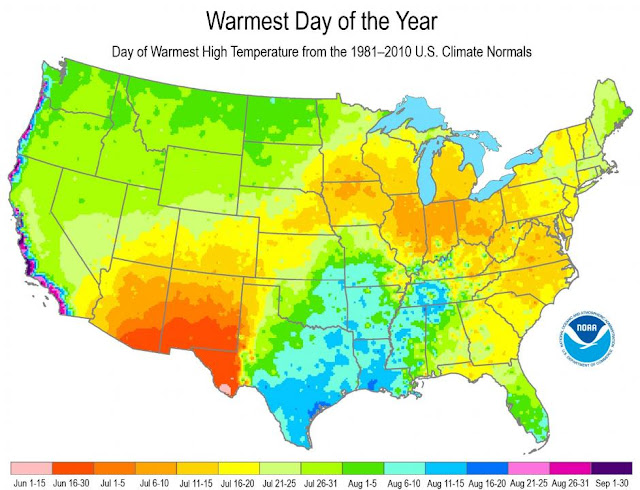 If you live in the desert Southwest: Arizona, New Mexico, Utah, and Colorado, you've probably already had your warmest day of the year.  In fact, everyplace on that map with colors between yellow and red (including the one area in light pink) has probably already had its warmest day of the year.  I'm looking at you, Ohio, Indiana, Michigan, Illinois, Iowa, and much of the country.  In the green and blue colors, your warmest day is later.  Where I live, we're going into the warmest week starting Sunday.

This kind of story is like most weather stories.  You probably have an idea of the answer before you look at it, as I do, but the map gives a visual presentation and you can see how it varies around the country.  When I first saw this I was a bit surprised that it says our warmest week is likely to be before August because I consider August to be the hottest month.  I think the hottest part of our year is usually August plus a week or two on both sides.

On the other hand, I've been trying to get a look at Comet Neowise for about a week and haven't caught it yet.  The last couple of days have been too cloudy or outright raining in the evening and it's clear tonight.  I have a poor view to the Northwest, where the comet is located.  I've circled it in red in this screen capture from Stellarium, a high end planetarium program. This is the sky at 9:30 tonight. 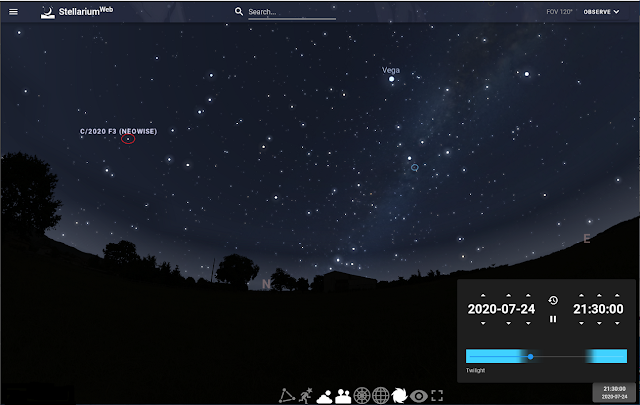 My view to the NW is compromised by all the trees in the neighborhood.  I simply can't see there from my backyard, so I need to try moving around the property.