The “That's Funny” Story in Iran Comes More Into Focus

Back when I posted the original story last week, I deliberately avoided speculation that it was an Israeli operation.  That was when there was just the one incident in the Alborz mountains, just east of Tehran, seemingly from the Khojir Missile Base in Iran.  Still the topic came up in the comments.

Since then there have been more apparent attacks, some of which appear to have targeted allegedly civilian facilities (not that defense work can't take place in such facilities). They include an explosion on June 30 at a medical center in northwestern Tehran, a huge fire on July 3 in the city of Shiraz, and an explosion at a power plant on July 4 in the city of Ahvaz.  There have also been anomalous explosions and fires in Iranian military facilities and news is starting to come out.  That PJ Media story links to a story on Radio Farda, the Iranian service of the American Radio Free Europe/Radio Liberty broadcasters.


A mysterious explosion or fire in the early hours of July 2 destroyed a building at Natanz enrichment facility and many believe it was an Israeli operation, whether through a cyberattack or some sort of air strike. There have also been other mysterious explosion and fires both at military and vital economic facilities.

In one of the essential analysis, Israel's Channel 13 TV military analyst Alon Ben-David cited the country's officials as saying the explosion at Natanz nuclear facility has postponed Tehran's efforts to enhance its uranium enrichment capacity by two months.

"The facility, where Iran develops its more advanced centrifuges, took a substantial hit; the explosion destroyed the lab," Ben-David said, adding, "Those were centrifuges that were supposed to be installed underground at the Natanz facility; they were intended to replace the old centrifuges and produce a lot more enriched uranium, a lot more quickly."

Israeli military analyst Ron Ben-Yishai, told Radio Farda that “by using the new generation of centrifuges Iran could have acquired a nuclear bomb with staggering speed, within weeks or months.”  Instead, Iran is suddenly far behind their previous capabilities.

While Iran hasn't officially blamed Israel, they have apparently tried to “reach out” to a few Israeli officials.  Israel's premier intelligence agency, the Mossad, claims to have broken up planned or attempted Iranian attacks on Israeli diplomatic missions in Europe and elsewhere, according to a report Monday.

The main reason I was slow to go down the road of saying it must be Israel is the fact that nothing I came across last week had Iran blaming Israel or the US (the little Satan or the Great Satan) for the attacks.  There might be something else going on, too: anti-regime forces from Iran itself.  I'm reluctant to pass on this story because it's from the New York Times, a source I consider completely unreliable, but that sometimes, accidentally, does actual journalism.  Take it at face value.  Right after the Natanz blast, the Times reported, staff members of the BBC’s Persian service said they


received an email from a previously unknown group, which referred to itself as the Homeland Cheetahs, before news of the fire became public. The group claimed responsibility and said it was composed of dissidents in Iran’s military and security apparatus. They said [their attacks] would target above ground sections of…facilities so that the Iranian government could not cover up the damage.

Even if it wasn't this homegrown Iranian group doing the operations, but simply helping either Israeli or US operators, that seems it could be an important development.  We've heard that the Iranian people are fed up with the mullahs and want to be rid of them; could this be a turning point? 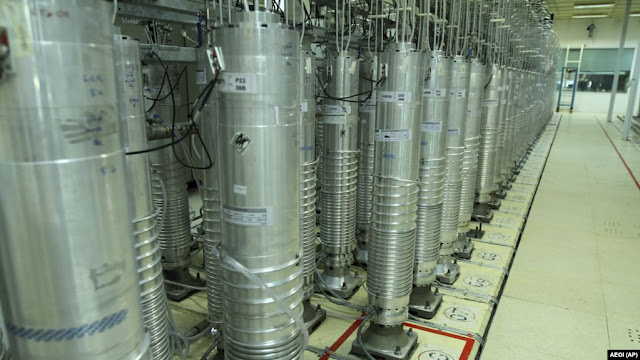