You may have seen the story of the “Shock Poll” from Rasmussen about 50% of Americans agreeing with the statement that it’s at least somewhat likely there will be a violent attempt to overthrow the United States government within the next decade.  The poll results broke down like this: 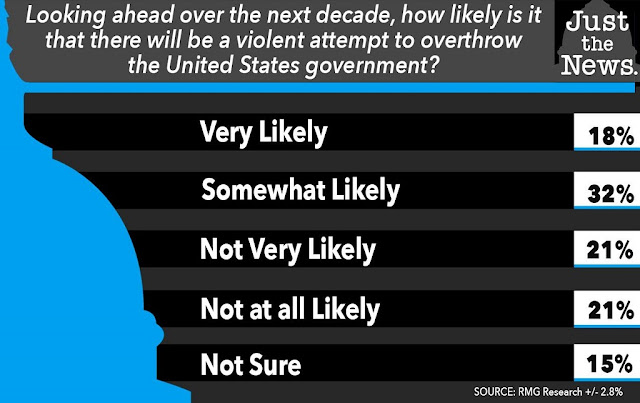 To anyone shocked, I think you're avoiding the news.  I think there should have been an option for, “it's going on Right Now.”  One of my regular reads, Divemedic at Confessions of a Street Pharmacist has been running a series on the stages of an insurgency (good summary in part 2) and deep diving into lots of details.  Pollster Scott Rasmussen almost went there.


Rasmussen noted that Republicans are a bit more likely to expect such violence, but the gap is fairly modest. That may be due to a perception among some that the current civil unrest is heading in that direction.

Saying there might be a violent attempt to overthrow the government in November isn't quite Right Now, but it's closer to Right Now than a decade from now.

Count me as thinking we're in the early stages of a well-funded and organized attempt to overthrow the US government.  Yes.  Right.  Now.