I Give Up Trying to Understand the Coronavirus Reaction

William M. Briggs, Statistician to the Stars, has a summary of the insanity you must read, but even he misses a ton of it.  For example, he rightly points out:


Sodomy is back on in (the appropriately nicknamed) Sodom-on-Sea. Yes, the city’s leaders say “Restrictions Relaxed for Gay Bathhouses, Sex Venues“. Spreading COVID via glory holes is not a worry anymore, not in San Francisco. (Spreading HIV is no longer seen as entirely undesirable.)
...
You can’t get into to see granny on her 103rd birthday—as a man running a small shop told me about his experience with this aged relative—but at least you can sodomize a man through a hole in the wall.

I suppose we're supposed to be happy they didn't make “sodomizing a man through a hole in a wall” mandatory.

But he doesn't mention the Supreme Court siding with Las Vegas that it was perfectly acceptable to allow casinos to have hundreds of people or more inside, as long as it was less than 50% occupancy, but a church couldn't have more than 50 people inside no matter how many people it could seat.

You can't go more than a few minutes without hearing, “cases are up!!!!!!”  But the number of deaths peaked in mid April and is way down by now.  (Gee, almost like these guys said in early May)

In my county in Florida, the peak number of cases is in 15-24 year olds, where the chances of dying from it are in the parts per million range.  Statewide, it's 25-34. We're being singled out in the national media for having a second surge, but then Briggs points out this:

Tests with 73% false positive rate should be taken off the market and burned in a big, hot fire.

It sounds to me that having lots of 15 to 34 year olds coming down with the virus is a Good Thing.  That much closer to making the islands of people the virus has to hop over to get to victims too big.  “Herd immunity.”  Isn't that one of the reasons for vaccines in general?  The media makes you deaf screaming about how bad it is, but only bloggers will point out important truths (this one from Gun Free Zone). 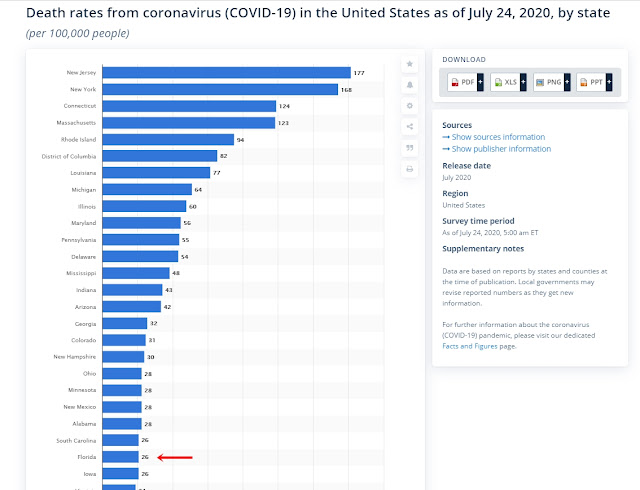 And I'm not even getting near the story of how we have stacks of doctors worldwide who are treating Covid patients with hydroxychloroquine and claiming the combination of that with a few other treatments is very effective, but the American media is screaming endlessly that not only is it not a valid treatment but that it will kill people.

If it doesn't make sense no matter how you look at it, it must be politics.  I have a suggestion for the media and the horses they rode in on.