The Mars 2020 mission Perseverance rover was mounted to the top of its United Launch Alliance (ULA) Atlas 5 rocket at Cape Canaveral Tuesday in preparation for liftoff this month, essentially completing the assembly of the launch vehicle and checking off another milestone along the way.


Omar Baez, NASA's launch director for the Perseverance mission, said Wednesday that the launch is on track for July 30. The launch window opens at 7:50am EDT (11:50 UTC), with launch opportunities available at five-minute intervals.

As we talked about here ten days ago, the launch was originally scheduled for July 17, the opening of an interplanetary launch period that extends into mid-August.  Like much of life in 2020, the mission was impacted by Covid-19 virus concerns.  This was during the critical phase of mounting the payload in the payload fairing and upper stage of the Atlas V.


Meanwhile, the Perseverance rover, its landing system and cruise stage — essentially three different spacecraft making up $2.7 billion NASA’s Mars 2020 mission — were prepared for launch inside the Payload Hazardous Servicing Facility at NASA’s Kennedy Space Center. The final steps to ready the rover for mating with the Atlas 5 rocket involved enclosing it inside its aerodynamic shell, which will protect it during entry into the Martian atmosphere, and then encapsulating the craft inside the Atlas 5’s payload fairing.

“We were working simultaneously on getting the spacecraft encapsulated, and we ran into some issues with the crew,” Baez said. “A couple of the folks were suspected of having COVID, and actually had COVID, and with the precautions that come with that, anybody that’s been in close proximity to those folks either get tested or choose to stay out of work for however long they think is safe under the current guidelines.”

The source article on SpaceflightNow.com goes into the host of problems that they've had.  It's challenging enough to get a major mission to Mars under any conditions, but the pandemic adds another layer.  One that caught my eye was a problem with the Atlas itself.


Teams also encountered a problem with a liquid oxygen sensor line on the Atlas 5 rocket. Engineers discovered the issue during a countdown rehearsal June 22, during which ULA filled the Atlas 5 with kerosene, liquid hydrogen and liquid oxygen propellants to put the rocket through a thorough checkout before launch day.

The test found something that couldn't be found any other way (which is why they test). The sensor line can't get tested to real flight conditions until the Atlas 5 is filled with cryogenics. Naturally, they had hoped it was a loose connector or something easy. Instead it was a pinhole leak in a weld.


A welder from ULA’s rocket factory in Decatur, Alabama, traveled to Cape Canaveral to address the problem. The configuration of the sensor line while the rocket is standing vertical made the work challenging, with the welder entering a cavity inside the rocket and working “upside down” near the Centaur upper stage’s engine section, Baez said.

Our weather has been in a pattern that brings showers to the east coast most days.  Any given spot might have a 60 to 80% chance of rain, but the east coast is the focus of the rains.  That affects launch operations, too.  Launch Director Baez says teams will work weekends straight through until the planned launch date.  If everything goes according to plan, workers will take a couple of days off to “reset” before the Atlas 5 and Perseverance rover roll from the Vertical Integration Facility (VIF) to Cape Canaveral’s Complex 41 launch pad July 28.


Another significant step to prepare for launch will be the attachment of the Perseverance rover’s plutonium power source. The Multi-Mission Radioisotope Thermoelectric Generator will be installed through a port on the Atlas 5’s payload fairing.

A flight readiness review is scheduled for July 22, and launch readiness review on July 27.  Approval of both is required to get clearance to roll the vehicle to the pad on July 28, but at least for now they're on schedule and looking like they'll get there. 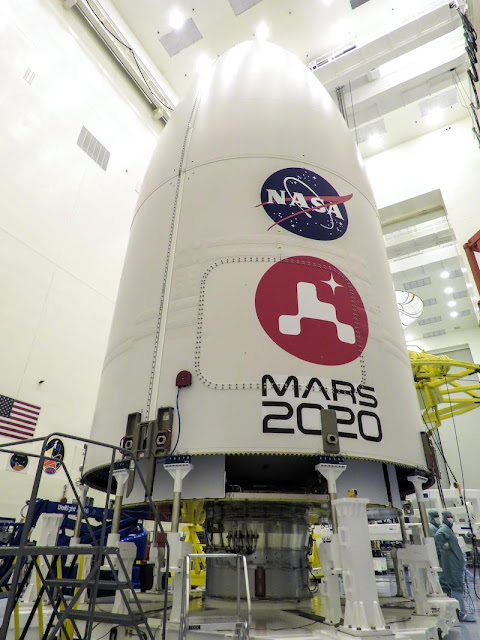