The last few days have been pretty depressing to write, and to read, I'm sure.  I want sitemeter to give me a "slitmeter" - how many people read my stuff and slit their wrists.  So I want to write about  something more fun tonight.

Most people know the art of M.C. Escher, a 20th century Dutch artist known for his mathematically inspired drawings, many of which depict impossible objects.  A famous example is Belvedere, drawn in 1958 and shown here: 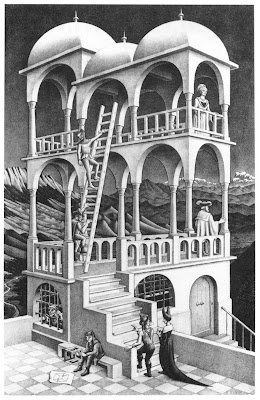 At first glance, this looks perfectly normal.  Then you notice that the columns that start in the front actually end at the back and vice versa.  Some of his drawings are impossible.  Look closely at the people on the stairs in Relativity: 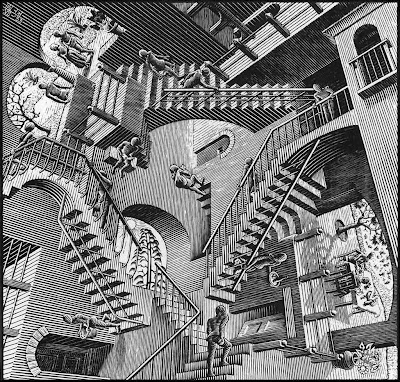 Some Escher drawings, a Penrose Triangle for example, can be made into real objects by using forced perspective: they look the way Escher drew them only when viewed from one very specific angle.

Professor Gershon Elber at Israel's Technion Institute of Technology has studied the drawings and developed ways to actually make models of these.  See his ‘Escher for Real‘ project at the Computer Science Department.  Dr. Elber has created a video that has garnered a massive following.