DiveMedic over at Confessions of a Street Pharmacist posts a link to a story skirting under the radar.  You should forgive the analogy because that's precisely what the story is about.  Market Daily News reports the administration is shutting down a major component of the southern US continental air defense system.


Our southern border is, in part, protected by the Tethered Aerostat Radar System (TARS), which utilizes moored balloons hovering at about 15,000 feet to identify low flying aircraft and missiles that may penetrate the border and cross into U.S. airspace.
...
According to Exelis Systems Corporation, the company that built and jointly maintains TARS with the U.S. Air Force, the government has ordered a complete shutdown of Aerostat flight operations...

Without these defense radars, low flying aircraft will go undetected.

It will be open season for any drug/gun/slave smugglers, terrorists flying in with nukes, low altitude missiles, or even a full scale low elevation invasion/attack against America."

The "Tethered Aerostat Radar System" is known locally by the nickname "Fat Albert" - the familiar big white blimps are visible at several locations around the southern US.  Originally used for drug interdiction, they're now part of the NORAD radar system used to watch for potential invasions of the Southern US.  They are not the only tools used in the air defense systems, with OTH radar stations covering southern approaches, and other options, but they are an integral part of it.

Still, it's hard not to notice that surveillance of the US population has increased with that massive data collection center the NSA is building in Utah, and the ongoing drills featuring helicopters flying low in Miami and Houston seem to presage some sort of coming military action in dense urban areas like, well, Miami and Houston.  It makes one inclined to think that the administration is more afraid of its citizens than invasion.  More concerned with enemies domestic than foreign.  I know I am. 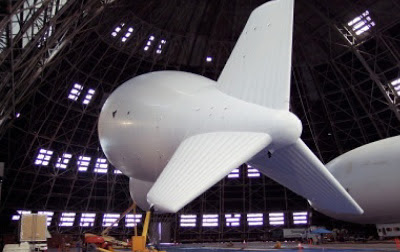