Back at Christmas, dear Mrs. Graybeard gifted me with an RCBS Progressive reloading press.  The Pro2000 with auto-indexing.  Due a miscommunication or two, she missed a couple of needed parts (shell holders) and while I was able to get them, I wasn't making progress assembling it until, well, today.  Vacations are wonderful things.

My blitch is this: is it just RCBS or are all reloading presses essentially a DIY kit of not-very-well-made parts.  I thought RCBS had a good reputation.  My only experience with reloading has been with RCBS stuff, and I had a heck of a time with the hand primer.  I had to send it back and exchange for a second one that finally worked.

This time, my gripe is with the sexy micrometer adjustment on the powder dispenser.  The dispenser comes with two cylinders, one with a larger bore and capacity, which uses a large screw to meter out the amount of power it will throw, and a smaller set.  The smaller set will handle 2 to 50 grains of powder which covers pretty much everything I've got to reload, so I'm setting up to use the small cylinder and small metering screw.  The manual says to screw the micrometer into the cylinder and note where the index line (zero) comes up.  It should be on the top surface of the cylinder where you'll see it; if it doesn't, three washers are included, each one of which should rotate the index line about 90 degrees back.  My line came up pretty much 180 degrees out, so two washers should get it to the top, right?

Only they don't.  The index line stayed in exactly the same place.  Puzzled, I repeated this process a few times and eventually realized that the washers are loose and flopping around.  That means the micrometer's thread is bottoming out in the cylinder's hole before it can be threaded in far enough so the washers matter. And that means a poorly tapped hole is keeping the micrometer thread from going all the way in.  Tapping through holes ain't exactly rocket surgery, you know.  People have been doing that for a long time.

Not having the right tap (it appears to be about a 9/16" by 18 TPI hole, but I didn't really measure the pitch diameter), I tried to force it in, essentially using the threaded portion as if it were a tap to clean up the threads in the hole.  Those of you who have done this know that didn't have much chance of working.  And it didn't.

Now I have both a cylinder with a poorly tapped hole and micrometer with damaged threads.  Note the boogered (damaged) threads at the left end of the micrometer center. 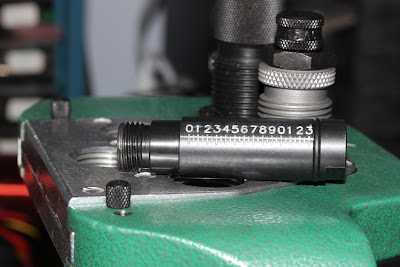 Pardon my blitch, but is this normal?  Do you ordinarily have to machine your own parts for reloading equipment you buy?  Equipment you buy at no small expense, I might add.  Heck, I'm a home shop machinist, I like to make things.  But nowhere on the box does it say, "Reloading Press Kit", or "holes drilled, you just tap!".  It reads like it's supposed to just go together and work.  At this point, I'll say, "yeah...right".  (And, yes, I've contacted customer support, first waiting on hold for almost an hour, then sending an email.  We'll see how they handle it.)