One of those things my Mom always said was, "The best laid plans of mice and men oft go awry". (which the Quotations Page tells me is from poet Robert Burns).

With a long weekend coming, I was filling it with all sorts of ideas of what to do.  As it turns out, I had a hard time leaving the office yesterday.  Seems the facilities crew decided that prime quitting time was a good time to wet mop the stairs.  I've known for a while that my New Balance trail shoes aren't very good on wet surfaces, I just had it reinforced.  I fell three steps, landing hard on the sharp edges of two steps on my back.  Temporarily winded, I sat on the floor at the midway point for a minute before getting up, carefully walking the other half way down and driving home.

To make the story short, I suppose this is like anyone slipping on ice up in the frozen north.  A trip to the ER later showed nothing broken.  Use ice packs, muscle relaxants and a prescription NSAID.

My butt is the size of Volkswagen bug and a cool shade of blue-purple, but what really hurts is where the stair hit between my shoulder blades. 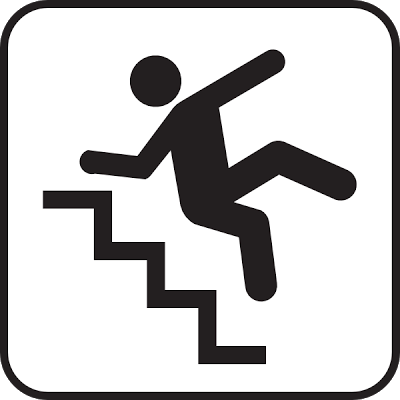 Yeah, it was just like that.  All weekend plans on hold.