According to news that broke yesterday, only 27% of the people know what the Federal Reserve's QE program is.  Barely over a quarter of the people understand the single biggest economic story of the decade, the one that will bring misery into their lives as sure as the tides change.

I know my regular readers are in that 27%, so for the rest of you, QE - quantitative easing - is the creation of money out of thin air.  It increases "liquidity", the total amount of money in circulation, thus allowing banks and the Fed.gov to buy things they ordinarily wouldn't have money for.  In the current version, QE3 or QE4 or QE to infinity and beyond!, the money buys US bonds financing the deficit spending.  We currently buy about 90% of our bonds.  Notice that 90% figure means that the vast majority of our debt isn't being bought by China or Japan or the EU or the Saudis.  We're buying our own bonds - loaning money to ourselves.  The Chinese in particular have been getting rid of US denominated assets as quickly as they can, without panicking the world.  (Note to other anal retentives: substitute the word "currency" for every instance of "money" in that paragraph.  Dollar bills are not "money" in the strict sense; they are currency.  Gold is money.  Silver is money.  Ammo could be money.  Oil could be money.  Paper could not).

If the First Law of Economics is "TANSTAAFL - there ain't no such thing as a free lunch" (as Heinlein put it) we should conclude there must be a cost to QE.  The cost is that it creates vast amounts of currency in circulation, which tends to raise the prices of everything.  That is, QE causes inflation.  It's not that they don't know they're causing inflation, that's one reason why they're doing QE.  They're deathly afraid of deflation because that hurts banks so they're striving to create inflation in the limited (fake) way they measure it.  Inflation hurts individuals, especially savers like retirees and others living off savings.  It encourages the use of credit, inflationary in itself.  QE causes the cost of living to go up, as Ronnie Dunn sings. 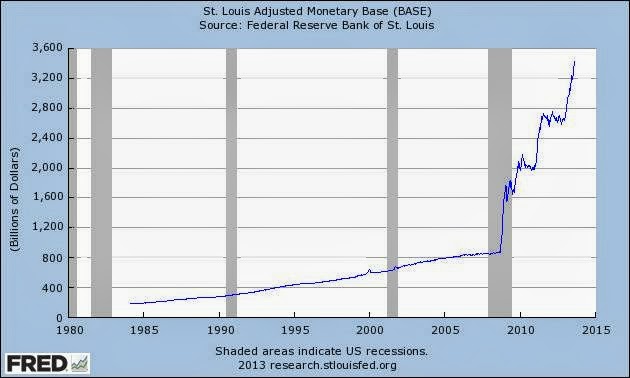 QE is the reason the prices on the stock markets are being bid up as well as the prices for oil, gas, food and all the essentials of life are being bid up.  It's responsible for the claimed economic growth, and virtually everything the government claims that's going well.

If you have time to kill, just click on the "Economics" tag just below this post and you'll get page after page of everything I've written with that tag.  Or go to the search bar at top left and enter QE3 or QE.