I got this magazine as a supplement along with one I subscribe to the other day.  Instant creep out. 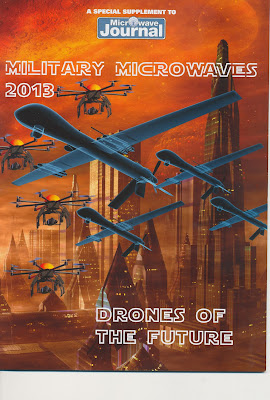 I know that UAVs are becoming a larger a part of the military aerospace market, but that's a downright creepy image.  You'd have to be pretty tone deaf to the public outrage about the use of drones on the homeland to publish that.  It's sufficiently science fiction-y that you can convince yourself it's not your own little Metropolis with that large orb on the middle right (is that another planet, or the Death Star?).  As you look at that illustration, it definitely doesn't look like any place on our planet; the large cratered moon on the upper left, the illuminated planet at mid-right and yet another orb at top right.  The buildings remind me of the architecture on Coruscant; the capital planet of the empire in the Star Wars universe. If that's the future, it's a pretty awful place.

For the record, I don't work in this stuff; I work in civil aviation.  Originally communications radios, like those used for air traffic management, then collision avoidance systems, and lately in weather radar.  Magazines like this one are freebies for subscribers, paid for by the ads they carry.  While everyone who gets Microwave Journal doesn't work in military electronics, it helps their circulation numbers to send us these.