Like much of America, I heard of the Loma Prieta earthquake on October 17, 1989, when the news bulletins hit that the World Series had been interrupted by a strong quake.  An image that will never quite leave my mind is the collapsed dual-deck highway, I-880, the Cypress Viaduct. Thinking of what the people trapped between those spans went through as they died has always made my blood run cold. 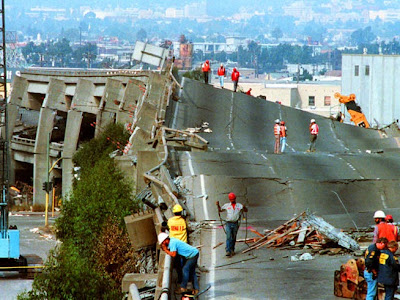 But I'm an engineer and while friends say we "think different", we are always about fixing things and making them better.  My homies in the world of Civil Engineering haven't been idle about quake damage and have been researching how to build bridges that can survive really big quakes.  We read in a Design News update that current research is into nitinol, the nickle-titanium alloy used in lightweight, flexible eyeglass frames.  DN links to original work by Cal Tech undergrad Misha Raffiee published at the National Science Foundation.


A large majority of bridges are made of steel and concrete. While this combination is convenient and economical, steel-concrete bridges don't hold up as well in strong earthquakes (7.0 magnitude or higher). Conventional reinforced columns rely on the steel and concrete to dissipate energy during strong earthquakes, potentially creating permanent deformation and damage in the column and making the column unusable.

The idea is to replace the steel reinforcing bar ("rebar" in common terms) with superelastic Nitinol.  Nitinol is a member of a family of "shape memory alloys"


While the majority of SMAs are only temperature-sensitive, meaning that they require a heat source to return to their original shape, Nitinol is also superelastic. This means that it can absorb the stress imposed by an earthquake and return to its original shape, which makes nitinol a particularly advantageous alternative to steel. In fact, the superelasticity of nickel titanium is between 10 to 30 times the elasticity of normal metals like steel.

The new designs were modeled with earthquake simulation software developed at the Peoples' Republic of Berkley, and prototype scale models of bridge structures built.  There's a video on another page at the NSF of them testing a prototype to magnitude 8 earthquake levels.  The models and experiment are in agreement, a sure sign they're progressing well.

They estimate the safer bridge will cost 3% more, but I find that hard to believe.  Civil projects always seem to come in over budget (as well as late) but maybe they mean the materials cost 3% more.  Materials are probably a small portion of the expense in building it.

Progress is a good thing.  Not getting people crushed in another bridge like the I-880 is a great thing.