The Bloody History of Organized Labor

I enjoy my extra day off this week as much as anyone, but the history of the American labor movement that led to this day off is a pretty bloody history. Most of us are probably aware of the recent incitements to violence and riot, such as the problems in Wisconsin in 2011, when legislation to attempt to get control of the state budget led to confrontation in the state offices.  Remember this email, sent to several State Senators by a union supporter because lawmakers were going to ask union members contribute to their benefits plan, instead of it being 100% paid for by taxpayers?


Please put your things in order because you will be killed and your families will also be killed due to your actions in the last 8 weeks.

Please explain to them that this is because if we get rid of you and your families, then it will save the rights of 300,000 people, and also be able to close the deficit that you have created. I hope you have a good time in hell. ...

We have also built several bombs that we have placed in various locations around the areas in which we know that you frequent. This includes: your house, your car, the state capitol, and well, I won’t tell you all of them because that’s just no fun…

Please make your peace with God as soon as possible and say goodbye to your loved ones. [W]e will not wait any longer. YOU WILL DIE!!!!

In what world is it acceptable to threaten killing someone and their family, and not expect any negative consequences for it?  Only in the upside down world of labor unions.  Daniel Sayani at the New American puts together a short history of union violence in this country.  The first blood spilled by union activists apparently goes back to the Haymarket Square massacre in 1886, in which:


... striking union workers threw a bomb at Chicago police, killing eight police officers and countless civilians, after being incited to their lethal rampage by socialist Samuel Fielden (not unlike how Marty Lamb was beaten after the crowd of unionists was inflamed to violence by “progressive” Rep. Capuano) [Note: explanation of Rep. Capuano reference in that article on the New American - SiG]

Because of their enormous influence in the Democratic Party, unions have specifically gotten themselves exempted from laws the rest of society must follow.  You probably know about the exemptions from the anti-trust laws, and extortion laws, and that they're trying to exempt themselves from Obamacare.  (just one example for each of those).  And, of course, you know when unions physically assault conservatives like Kenneth Gladney there never seems to be any consequences for the union thugs.

Unions are progressively more desperate because membership in non-government employee unions is down.  Only government workers' unions are growing, where no true negotiation takes place because there are no parties at the table risking anything.  Unions like the SEIU and the AFSCME are the beneficiaries of fat government contracts.  They get more union dues which they siphon off to contribute to getting Evil Party politicians elected who will negotiate new, fat contracts with them. 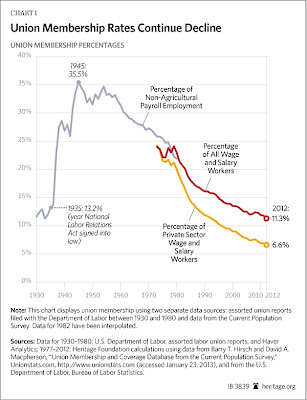 I didn't mention in last night's post that the SEIU and other unions are the ones behind the minimum wage protests.  Despite the rhetoric, they're not trying to make anyone's lives better except for their own.  If members get some crumbs that make their life better, that's nice.  For non-unionized workers, who have to pay them their higher wages, too bad.  As the saying goes, FUJIGM.

Posted by SiGraybeard at 7:31 PM