Is This the Reason for the Noise About Syria?

Maybe it's just me, but this really seems like it has the fingerprints of Samantha Power  all over it. Ms. Power, of course is our virulently anti-Israel UN ambassador and is married to Cass Sunstein.  Sunstein, of course, is the former regulatory czar for the administration and now on the committee tasked with determining whether or not the NSA is violating American civil rights.

Why do I think it's her doing?  Ignoring the presidential politics for a minute (and everything this president does is weighed for domestic politics), Ms. Power is famous for being involved in the "Responsibility to Protect" project.  It seems to me she was deeply affected by the Rwandan genocide, as evidenced by her book "A Problem from Hell", and while I can't say I know she was a founder of ICRtoP, she is mentioned there many times.  The ICRtoP organization was at least partly founded by George Soros, and Power worked for Soros at one time.

While I understand that watching a genocide would be horrible, does a nation stay perpetually at war to stop another one?  At what cost to that nation?  While this is admittedly arm chair psychology of the worst kind, I think that her inability to convince the President to get involved in Syria earlier - for the first 100,000 civilian deaths - increased her desperation to get into it now.

Looking around tonight, I see I'm not the only one on this trail.  Aaron Klein at WND wrote a piece on her involvement six days ago.


The diplomats say that last week, Power recommended Obama strike in Syria without first consulting Congress, a move from which the president clearly seems to have backed away.

It's a role similar to the one she had in the (first) Libyan fiasco: urging the US get involved to provide air cover for Islamist rebels.  Back in 2011, when I was first writing about her and R2P, I found this gem:


Responsibility to Protect has the potential to, or if I may, is intended to, eliminate national sovereignty.

“We can no longer hide behind state sovereignty.”

Klein offers quotes from an article by Soros that gave the philosophical basis to R2P.  According to Klein, Soros starts with the surprisingly reasonable idea (for him), that:


In the article, Soros wrote: “True sovereignty belongs to the people, who in turn delegate it to their governments.”

From there he goes directly to intervention:


Soros said that if governments “abuse the authority entrusted to them and citizens have no opportunity to correct such abuses, outside interference is justified.”

“By specifying that sovereignty is based on the people, the international community can penetrate nation-states’ borders to protect the rights of citizens,” he wrote.

In other words, if a government abuses its people, the "international community" can use its military to "...penetrate nation-states’ borders to protect the rights of citizens.”  With the strongest military in the world that means the US will be sent to do these things. 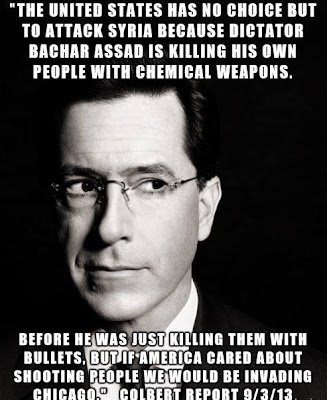