I want to thank all of you who left comments Sunday night, or who just quietly sent a prayer or a good thought.

My mom passed away quietly in her sleep at home early Sunday morning, as best as we know.  She went into hospice care for Multiple Myeloma three months ago, virtually to the day, and went home for the last time in mid-September.  Mom just turned 91 a month ago, so it may seem strange to assign a cause of death, but when she was diagnosed, they said she was too weak for chemotherapy or other treatments except for palliative care.  When her weekend aide came to see her at 9 AM, she was unresponsive.

My dad preceded her by 31 years: 1982.  He also died of MM, almost certainly coincidence as there are no known ways of it being contagious.  It has only recently struck me how young she was when he died.  31 years ago she was 60, and now that age is so close it's virtually here.  She never wanted to date again, never really wanted to leave the house.  She seemed to draw the curtains tight around herself and just want to stay in by herself.  We visited regularly for at least a decade, less so in the last ten years.  Back in '03, around the time of the Shuttle Columbia disaster, she fell and hurt herself (which was to become a recurring theme).  After a few visits she told us to bug off, in so many words, saying, "look, it's not like I'm gonna die any day now, you don't have to keep coming down".

So we started going through photographs she had put aside in drawers everywhere and all the memories in the house.  They moved into that house in 1974, not too long after I had moved out on my own for the first time.  Brother's and my first jr. high wood shop projects.  Ceramics.  There are some modeling clay figures dad made... in the late 1970s?  It seems she slowly distributed the things she wanted to go to specific people.  It's not much of an "estate", but it's a tribute to dad that he set her up so well she could go 31 years on it, with the medical expenses and everything else, and still have a little left over.

I came across this picture: mom as little girl with her mother.  I'm guessing 1930-ish.  Grandma passed away in 1979. 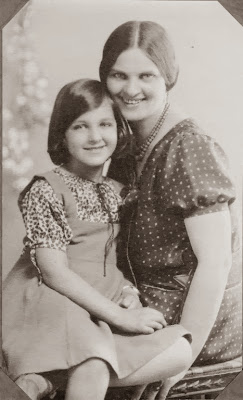 Photography that gave paper prints wasn't around very long when some of these pictures were taken, and the pictures were clearly treasured.  Those old monochrome or sepia prints lasted indefinitely in a dark drawer.  Today, color prints barely last a decade.  Anything digital will likely evaporate, the bits will decay or (more likely) become an unreadable format in 20 years.  These memories are special.