Some years before I joined the blogosphere and more years before I even started reading the liberty sphere, Billy Beck coined the term "The Endarkenment"; the opposite of the renaissance and era of enlightenment, he meant the term to describe the descent into coming dark ages.  America in the opening decades of the 21st century is a dark place, becoming darker by the day.

I refer in this case to the firing/railroading of Mozilla CEO Brendan Eich.  Eich's dismissal was clearly because he exercised his protected rights to free speech by contributing money to a political campaign.  Nobody is citing evidence that his behavior to anyone anywhere had anything to do with his dismissal - if they were, it would be million point type headlines on every newspaper.  No, the root of his problem is that he believed something counter to the orthodoxy he's required to believe; "Are you now or have you ever been a supporter of proposition 8".  It's pure McCarthyism; nothing less.

Mozilla made a statement that is laughably idiotic to try to cover this up:


Mozilla believes both in equality and freedom of speech. Equality is necessary for meaningful speech. And you need free speech to fight for equality. Figuring out how to stand for both at the same time can be hard.

Earth to Mozilla:  No.  No it's not hard.  Allowing free and meaningful speech means allowing free and meaningful speech.  It means you have to give up being rabid control freaks.  It means accepting that you will hear things you don't like.  Period.  If everyone agrees, it isn't free speech, it's a choir singalong.  If everyone agrees there is no need for free speech.  If your idea of convincing someone of your opinion is firing them and ruining their life, you're not interested in free speech or opinions, you're interested in having power over other people and dominating them.  In a word: Mozilla, you're scumbags. 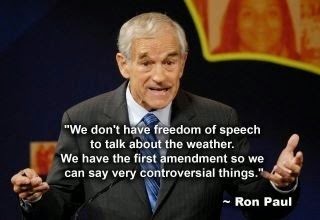 California, in its infinite idiocy, has decided that it will publish lists of everyone who contributes to any cause.  That means thugs of all stripes will mine that information and attempt to destroy anyone who disagrees with them.  All evidence says that this group will continue their attempts to destroy anyone whose opinion on Prop 8 is doubleplus ungood unacceptable.

Everyone is quoting Andrew Sullivan on this topic, and it's easy to see why.  Andrew has the opposite opinion on this topic from Eich, but he understands the problem to its root.


Will he now be forced to walk through the streets in shame? Why not the stocks? The whole episode disgusts me – as it should disgust anyone interested in a tolerant and diverse society. If this is the gay rights movement today – hounding our opponents with a fanaticism more like the religious right than anyone else – then count me out. If we are about intimidating the free speech of others, we are no better than the anti-gay bullies who came before us.

Andrew, you and I probably agree as often as a stopped clock and an atomic clock, but I'm 100% with you on this.  This is absolutely not a gay issue and this isn't a left/right issue.  Some of the best comments on this come from Tammy Bruce and other gay commenters.  This is no less than one of the key founding questions of our country: are people entitled to an opinion that conflicts with the orthodox belief system.

I'm an engineer.  Human psychology, especially deviant psychology is almost incomprehensible to me in its illogic.  An aspect I've never understood is how someone who has been abused and then is freed of that abuse can want to inflict that same abuse on others.  I think the healthy reaction would be to dedicate one's life to ensuring no one else suffered abuse again.  The people who railroaded Brendan Eich are the kind of people who would get out of abuse and then celebrate that they could do the abusing now.  It's a mental illness I can not comprehend.

Rod Drehrer at the American Conservative has a good quote to sum this situation up.  Mr Drehrer: you have the floor:

Posted by SiGraybeard at 2:52 PM