Let me apologize if I bust the bubble of anyone who thinks paper coffee cups can be or are being recycled.  That also applies to ice cream cups, or cartons, or pretty much any paper container used for liquids.  The only recyclable coffee cups are the porcelain, china or other non-disposable cups that you can wash.  The problem is that these cups and containers are coated in a layer of LDPE: low density polyethylene used for waterproofing, and that gums up the machines used for recycling.

But that might be changing.  According to Machine Design editor Leland Tesch, a company called Smartplanet Technologies has developed a coating called "mineralized resin" that doesn't gum up the recycling machines.


Smartplanet Chief Technology Officer Chris Tilton told us when cups coated with the stuff go to a paper mill, the plastic contamination from the coating is small enough and dense enough to be filtered out of paper fibers. The point is to make the resulting coating go through the recycling process more like a mineral than like a plastic. But Smartplanet’s coating can be applied with existing equipment normally used for LDPE. The thermal properties of the minerals they add are such that coatings of their substance can go on at the same superhigh speeds as used for conventional LDPE.

But what if we could recycle the plastic cups?  Berry Plastics has developed a cup made out of No. 5 plastic polypropylene, a material which many facilities can already recycle. The material is a good insulator so it can replace disposable foam cups.  They've come up with proprietary methods of making coffee cups that take advantage of the insulating properties with a cellular structure, like foam.  The cup is so durable, it doesn't need to be recycled after one use.  If you had these at home, you could wash them in the dishwasher and reuse them.  More durable than the ubiquitous Solo cup, use it and wash it until it starts to look like it's losing integrity and then toss it in the recycling bin. 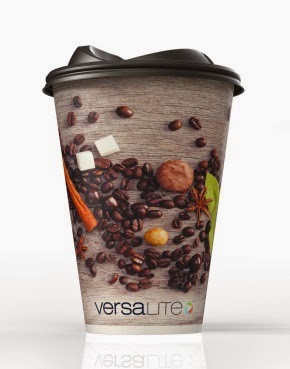 Hopefully, we can end up with products that don't cost cities $4000/ton to recycle but that they can only sell for $32/ton, as is the case today.