It's Time for the End of an Error

It's time for the end of an error.  It's time to arm the Army.  It's time US soldiers, airmen, marines and sailors were allowed to defend themselves in Ft. Hood and every other base in the US.

If these men and women were on any other piece of property in Texas, they could defend themselves against an armed crazy person by concealed carry. 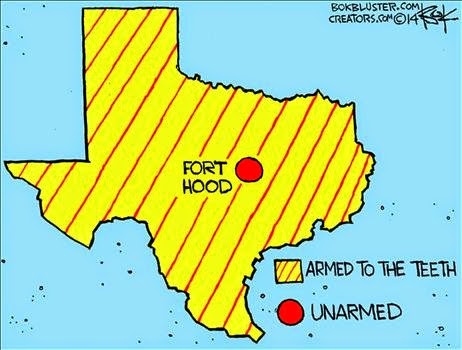 There is simply no rational argument against it.  The country routinely brags this is the best trained fighting force in the history of the world, but they're not well-enough trained to be trusted being armed at home?  But we trust them to be armed on bases around the rest of the world?

I don't care who started it; I don't care how far back it goes; I don't care if it's a D thing or an R thing because it's a stupid thing.  I don't know how this idea got started in society that if some aggrieved soul has a problem with anything he goes into the nearest gun free zone and starts killing people, I just know that it has to stop.  The fact that the uniformed military has not just the ADD-ridden high school snot, but Achmed, L'il Kim and a half dozen others gunning for them just means they need self defense the most.

Last night, Megyn Kelly on Fox impressed me twice in the opening few minutes of her show.  First, she announced that the shooter's name Will Not Be Mentioned on her show; there's enough evidence to convince her that's what most of these psychos want.  Within seconds after that, she was hounding a Texas senator (I think) about why concealed carry isn't allowed on bases.  Concealed carry has a great track record of stopping this sort of thing.  It's time to stop the stupidity and let people protect themselves.