The 12th Root of Two

Chances are that if that number means anything to you, you're one of the geeky few who are interested in – or aware of – the intersection of music and mathematics.  Stand by for some observations.  Some of this is going to get weird, I'm sure.

Music is as old as humanity.  Every society ever found has music, and although the scales may not be the same, there seem to be relationships that follow.  Long before humans could measure frequency (or had a word for it) musicians knew that there are tones that are related to each other.  If you play a stringed instrument, for instance, you can hear beat notes between strings and minimize the differences.  The concept of octaves, two tones that were the same musical tone but twice the frequency, was known for a long time, but not by measuring frequencies.

Western music has evolved to be based what's called the "equal tempered" scale; there's a constant difference between tones.  The scale is based on a series of 12 semitones or half steps, or 7 full tones.  Wait – shouldn't there be 14 semitones if there are 7 full tones?  Welcome to the first oddity: there are two places in a scale where no semitone – no half step – exists.  There are only 7 notes in written music: A through G.  In common notation, a scale has 8 notes - you include the ending note one octave above the starting note.  The easiest scale to show is the C scale, which goes from C to C; C – D – E – F – G – A – B – C.  There are no semitones between E and F or B and C.  The number of half steps between the notes of any scale are 2 2 1 2 2 2 1, and music theory students will laboriously derive scales starting on every semitone in an octave.  If you were to measure the frequency of the two C notes, the second C is exactly twice the frequency of the first one.  For example, middle C on a keyboard, so-named because it is the C closest to the center of a piano keyboard, is produced with a frequency of 261.626 Hz.  It is also called C4  - the fourth C on piano.  The next C (usually called High C or C5) is 523.251 Hz.  Why the oddball numbers?  Why decimals with 3 decimal places?  Because the 12th root of 2 is an irrational number, which means it can't be obtained by dividing any integers.  Its value is approximately 1.05946309435929 although the decimal never ends.

Other forms exist by using other combinations of tones.  Some of them add musical "suspense", somehow sounding stressed or unresolved, as if there's some sort of tension between the tones; replacing the 3rd with a 4th in a Sus4 chord.  Others resolve that tension.  Still others blend in so well with the original major triad that you hardly know they're even present.  Maybe an experienced musician will pick out a C2 being played instead of a plain C major chord; most won't, while everyone can hear the distinctive dissonance of a G6 alternating with a plain G major in the opening of the Eagles' "Tequila Sunrise", for example.

It gets weirder.  You know that meme that all really famous popular songs come down to a very similar 4 chord progression?  The progression is called I V vi IV ( where the lower case vi means the minor form of 6th chord).  It's a meme because it's absolutely true.   Staying with the key of C (it's easier) C D E F G A B C, that turns into C G Am F.  Not only that, but I vi IV V (C Am F G) accounts for another few thousand songs.  Why do certain progressions work together and others don't?  I have a book of chord progressions, and there are many out there.  This particular one is less than a hundred pages long and yet quite possibly contains the guts of every song ever written.

What this means is that some ratios of multiples of the 12th root of 2 are pleasing to the human ear and others aren't.  Why is that?  Yet another weirdness: the value for A (and, thereby, the entirety of music) has changed since the great composers of the 17 and 1800s were alive.  I've heard speculation that if Mozart were alive today he'd be physically sickened to hear his music.  I don't really know how we could know, but while the individual tones would be different, the ratios of the tones would be the same.  I rather think that music would sound strange to a reanimated Mozart, but that he'd soon adapt to it, since the ratios and harmonies are the same. 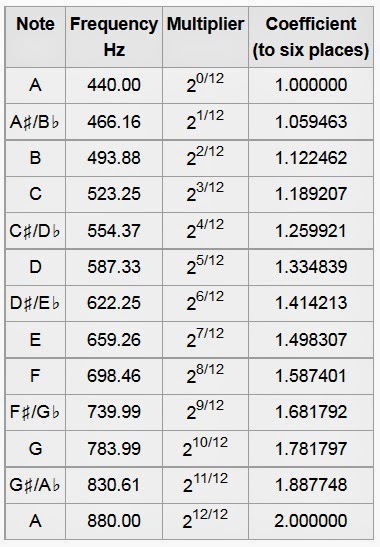 I've never seen an attempt at explaining the sensitivity to musical tones as evolutionarily advantageous that seems like a compelling argument to me.  The Wiki entry for octaves says that monkeys experience octaves and that it appears to map to mammalian brains in the thalamus, though. so it seems it has been in the hardware for a long time.

With no reasonable explanation for why it would offer survival advantage to be sensitive to certain separations of tones characterized by some factors of the 12th root of 2, we're forced to conclude one of two things.  Either it's serendipity: happy accident.  It's just there as the random accident of billions of random matings.  Or we can modify Ben Franklin's statement on wine:  it's "... a constant proof that God loves us, and loves to see us happy."

Now can someone tell me why car horns are in the key of F?