Techy Tuesday - A Couple of Advances

Most advancement in science and technology doesn't come in sudden, dramatic, "Eureka!" moments.  It comes in steady, incremental advances.  We didn't jump from 8086 based PCs to smart phones in one move, rather the steady application of "Moore's Law" (transistor density in digital circuits doubles every 18 months).  Two such stories grabbed my eye in the last few weeks.  Neither is strong enough to merit a column of its own, but as a shared "lookie here" piece, they're good.

First, researchers at the University of Washington have produced what they call the thinnest LEDs possible, in an effort to improve brightness and strength for flexible applications.  LEDs (Light Emitting Diodes) are used in millions of applications, from simple indicator lights on power sources to light bulb replacement, to the LED monitors that many of us are using to read this.  UW researchers produced a compound of the metal Tungsten and Selenium, Tungsten DiSelenide, in films a mere three atoms thick.  Researcher Jason Ross remarked:


"These are 10,000 times smaller than the thickness of a human hair, yet the light they emit can be seen by standard measurement equipment," Ross said. "This is a huge leap of miniaturization of technology, and because it's a semiconductor, you can do almost everything with it that is possible with existing, three-dimensional silicon technologies."

How do you handle films that are only three atoms thick?  Would you believe... masking tape?


Researchers use regular adhesive tape to extract a single sheet of this material from thick, layered pieces in a method inspired by the 2010 Nobel Prize in Physics awarded to the University of Manchester for isolating one-atom-thick flakes of carbon, called graphene, from a piece of graphite. 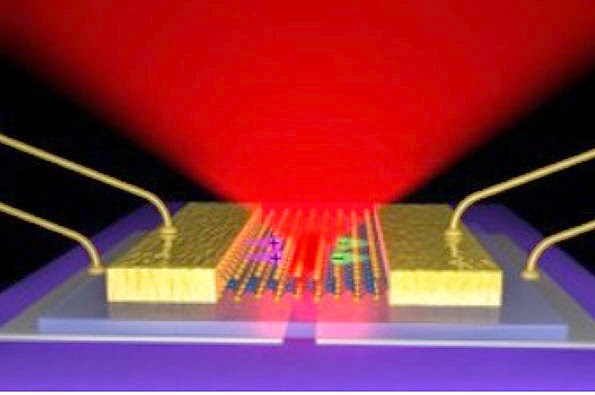 The other story that caught my eye was a new record in solar cell efficiency has been claimed by Panasonic, 25.6%.   This is the first cell to break the 25% barrier for a "practical size" solar cell.

Practically, this means that solar panels can get smaller for a given number of watts or produce more power for a given area.  Since the amount of energy reaching the earth's surface is considered a constant, it allows the designer to figure out how much area panels will take up.  The "solar constant" is 1200 W/sq yd., and this efficiency says you'll get better than 1/4 of that or 300 W/sq yd. out of panels.  Need 10kW?  10,000/300 is 33.333 sq. yd.s or 300 square feet.  In my series on building a solar panel, I assumed 16% efficiency based on data available.  That efficiency yields a panel that would be 469 sq. ft., 56% bigger.

I don't know what the theoretical limit is for the efficiency of these cells, but in my view the big deal here is getting down costs by coming up with better ways to make the cells.  As it is, solar panels are a good trade for building in remote locations where the grid hasn't reached.  They're expensive, but so is bringing in power lines over many miles.  If there's any technology that is potentially more disruptive than every house being independent of the grid, I'm not sure what it is.