A Dutch Woman received a 3D printed skull a few months ago and is now back to life as normal. The woman had a condition that causes bones to thicken, particularly in the skull. This had caused her skull to thicken to almost three times its normal thickness, which was putting pressure on her brain.


Led by brain surgeon Bon Verweij, MD,  the surgical team labored 23 hours in the operating room to replace the woman's skull with one made of acrylic. Her new skull was 3-D printed by an Australian company, Anatomics (St. Kilda, Victoria) that specializes in the custom 3-D printing of cranial and maxillofacial implants based on the patient's own CT and MRI image data. Verweij performed the operation with assistance from orthodontic surgeon Marvick Muradin, MD.
...
“The condition initially manifests itself in severe headaches,” Verweij explained in a hospital press release. “The thickening of the skull puts the brain under increasing pressure. Ultimately, she slowly lost her vision and started to suffer from motor coordination impairment. It was only a matter of time before other essential brain functions would have been impaired and she would have died. So intensive surgery was inevitable, but until now there was no effective treatment for such patients.” 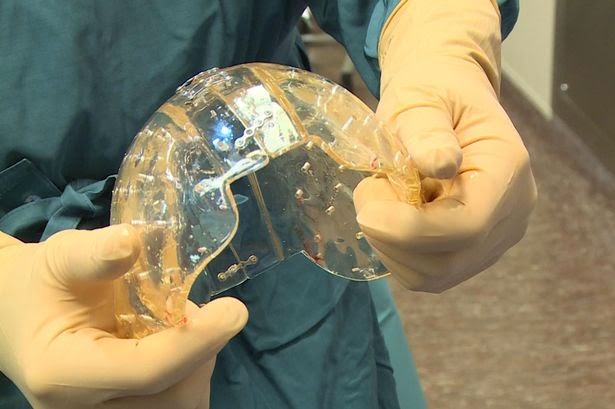 Remarkable, but not exclusive.  In the UK, a British man with a rare bone cancer had part of his pelvis removed and replaced with a 3D printed synthetic.

His surgery was three years ago.  UK newspapers report the man is able to walk with the aid of a stick.  Sure beats a walker - or being confined to a wheel chair or bed.

Remarkable, but only the beginning.  There was a story about soft tissue being engineered and four teenage girls with a rare and otherwise unrepairable disease receiving lab-grown vaginas made of their own body tissue, between 2005 and 2008.  This success opens the door to other, more complex organs being grown and printed.  The heart has been targeted, although that may be skipping over lower levels of complexity.

I've been a major advocate of, and believer in tissue engineering since first hearing of this years ago.  We are currently bringing thousands of young men and women home from battle with missing limbs.  Wouldn't it be fantastic to build them a replacement instead of a prosthetic?  What could be a better way to improve their lives? Think of people who have virtually every other part of their body removed during cancer treatment: liver, kidney, pancreas, intestines, skin, breast, and bones.  Think of the people who tear up a knee or elbow, or develop arthritis, or who lose pieces of ears, or nose to skin cancer.  Wouldn't it be a massive improvement to grow new cartilage and restore full functionality?  How can medicine talk about "quality of life" and not go down this research pathway?