There's a large and healthy group of liberty sphere folks who have gotten amateur radio licenses as part of their preps.  Ham radio offers both many more frequencies to operate on and many more modes to operate that dwarf anything obtainable any other way.  I've written somewhat on the topic before but bow deeply in recognition to Sparks31 who has done a great job on many topics.

In the last month or so, I heard of and looked into a piece of open source software put together by some very technically savvy hams; it's called FreeDV or Free Digital Voice.  FreeDV allows you to put an HF transceiver on the air using digital modulation techniques as advanced as any you'll find.  Let me quote from their intro page:


FreeDV is a GUI application for Windows, Linux and MacOS (BSD and Android in development) that allows any SSB radio to be used for low bit rate digital voice.

Speech is compressed down to 1600 bit/s then modulated onto a 1.25 kHz wide 16QPSK signal which is sent to the Mic input of a SSB radio. On receive, the signal is received by the SSB radio, then demodulated and decoded by FreeDV. Communications should be readable down to 2 dB S/N, and long-distance contacts are reported using 1-2 watts power.

FreeDV was built by an international team of Radio Amateurs working together on coding, design, user interface and testing. FreeDV is open source software, released under the GNU Public License version 2.1. The FDMDV modem and Codec 2 Speech codec used in FreeDV are also open source.

If you want to hear what it sounds like, check out this YouTube video of a test contact which goes back and forth between analog SSB and FreeDV voice.  An important point that they don't mention is that the only reason you can understand both is that the receiver is using FreeDV.  If that software isn't available, the speech will be unintelligible.  This YouTube Video lets you hear what the FreeDV sounds like just coming out of a speaker with no decoder.  It's also a test of the software algorithms in degraded conditions by artificially introducing degradations into speech test clips.

Side note: I was involved in development of a digital voice system called VDL Mode 3 for the FAA about a decade ago.  Even though it was sent at much higher bit rate and channel bandwidth, it didn't sound that much better than this.  One of its features was digital voice using a commercial (very closed source) digital voice codec developed by a couple of post-docs from one of the big schools.  FreeDV uses an amateur-developed, open source, free codec and sounds good enough when running slightly over 1600 Bits Per Second.  The first thing that jumps out at me about these tests is that the phrases used, male and female speakers, are identical to what we were using. 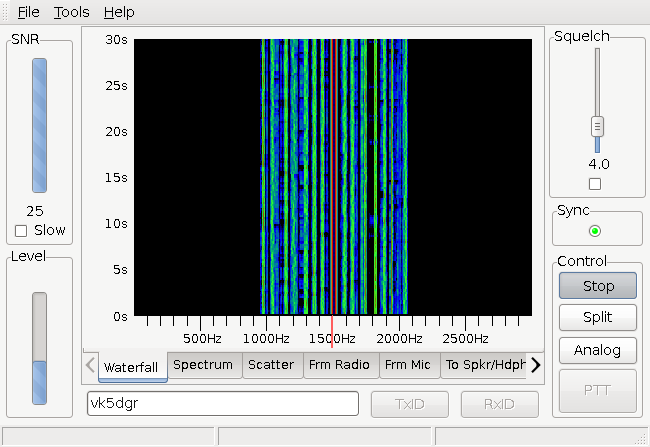 (The FreeDV GUI)
As always, if you think you'll want to get to know this mode, there's no time like today.  And the same provisions for security I've always mentioned go for this one, too.   Amateur modes are designed so that they can be publicly read by default.  I don't know where it's buried in the source code, but I'm sure if a couple of guys modified certain key parameters, they could come up with a version that was intelligible to a much smaller number.  It would be thoroughly illegal for use today, AFAIK.