A Nation With Honor is An Admirable Place

Regrettably not this country.


Prime Minister Chung Hong-won explained his decision on national television. He apologized "on behalf of the government for the many problems that arose during the first response and the subsequent rescue operation," in addition to "problems that existed before the accident."

An honorable man.  Compare that response to US response to Benghazi, where far fewer people died, due to incompetent government action.  No one has had so much as a demerit put in the personnel file, certainly no one has been fired, and no minister (cough, secretary of State) has even considered resigning.

The Citizens' Commission on Benghazi, a group of retired intelligence professionals and retired military, issued an interim report on the terrorist attack last Thursday.   The attack on our "safe house" in Benghazi resulted in the mutilation and murder of Ambassador Stevens along with the deaths of three others, technician Sean Smith and former Seals (/CIA operatives) Tyrone Woods and Glen Doherty.

Probably the best summary is that the Libyan war in 2012 marks the point when Washington DC switched sides in the war on terrorism.   "America blundered itself into a war of choice by allying with al-Qaeda."


This is our upside-down world. A bipartisan code of silence has been struck between John Boehner and Barack Obama. Thousands of guns and weapons were handed over to the enemy, and now we are supposed to feign surprise and shock that the September 11th, 2012 attacks in which Ambassador Chris Stevens and three other brave Americans were killed. It’s still unclear who knew what, when. But where are the voices calling for a permanent select committee with subpoena power to bring Hillary Clinton, Samantha Power, John Brennan and the administration’s top intelligence and diplomatic officials to account.

Picking back up, as that Townhall piece by Scottie Hughes says, think of this as Fast and Furious, Libyan Edition.


Surely one would think that if we agreed on anything, it would be that in the post 9/11 world al-Qaeda and its terrorist affiliates are our nation’s enemies. But apparently not. Whether out of indifference or malice, the United States sided with al-Qaeda in Libya. It’s as if the ATF set up a branch in Benghazi and started funneling guns to the enemy, much as they did with drug cartels along the Mexican border.

Gee, funneling guns to al Qaeda, as we're currently doing in Syria.  (Did we send al Qaeda in Libya TOW missiles like we're sending the Syrian rebels)?  What could possibly go wrong?  Don't answer that.

Ready for the really nauseating part?  None of it had to happen.  The whole stinking thing was unnecessary.


Muammar Gaddafi had offered to abdicate peacefully and turn over power, thus avoiding bloodshed and war.

A former admiral, Chuck Kubic was working those negotiations between the U.S. and Libyan military chains of command before he was told to step aside by Washington. Gaddafi wanted only two conditions to step down: permission to keep fighting al-Qaeda and the removal of sanctions against him. The Obama administration was uninterested in peace. They turned down the offer to broker a peaceful exit for the Libyan strongman. And thus months of bloodshed, culminating in the attack on the consulate in Benghazi. 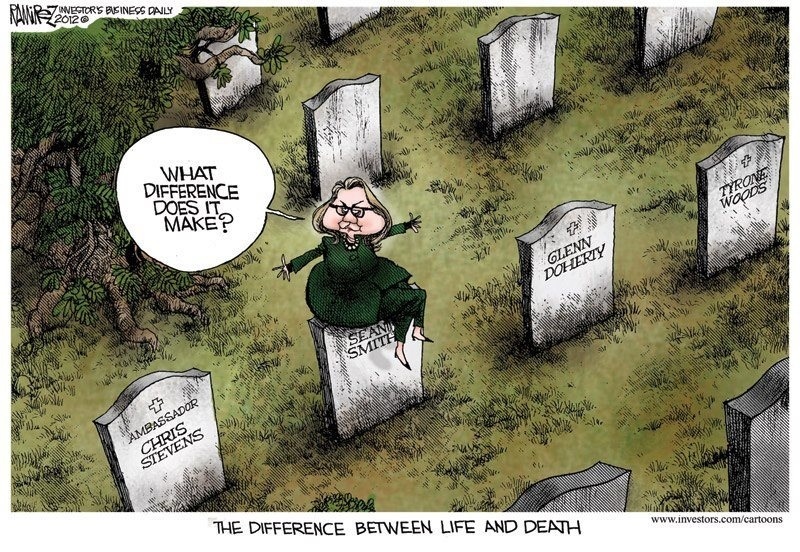