Almost under the radar, Fed Head Janet Yellen declared on Monday that the economy is too soft and the Fed was going to need to keep the monetary stimulus going "for some time".  In a prepared speech given in Chicago on Monday, she said the "extraordinary measures" will be kept up for the foreseeable future.


While policy makers have slowed the pace of their monthly asset purchases over the past three gatherings to $55 billion from $85 billion, Yellen said the central bank’s commitment is strong to helping sustain progress in the job market.

“Recent steps by the Fed to reduce the rate of new securities purchases are not a lessening of this commitment, only a judgment that recent progress in the labour market means our aid for the recovery need not grow as quickly,” she said. “Earlier this month, the Fed reiterated its overall commitment to maintain extraordinary support for the recovery for some time to come.”

Stocks - of course - were up after the pep talk, with the S&P 500 Index rising 0.8% to 1,872.72 at 10 a.m. in New York. The yield on the 10-year Treasury note was up three basis points, or 0.03 percentage point, to 2.75%.  Unless you're very new here, you know that I've been saying the growth in the stock market is all artificial, coming only from federal reserve stimulus funds.  Compared to even a flawed commodity standard like gold today, the stock market is down considerably since 2000.

But the interesting thing that's being reported (Bill Bonner) is that Yellen has admitted to colleagues that she's a disciple of Soviet economist Yuri Pavlovovich.  Who?  Yuri Pavlovovich was a young man and otherwise unknown economist when the Bolshevik Revolution shook Russia.  Young, but not stupid, Pavlovovich was shrewd enough to figure out which way the wind was blowing and set about ingratiating himself to "Uncle Joe" Stalin.  Once in the Kremlin, he studied how to improve the results of the Federal Reserve's Soviet central planning.


The central concept of Pavlovovich’s pensées was that people do as they are told to do. Few people are original thinkers. Few are willing to defy authority.

The job of the ruler, he figured, was therefore merely to direct human action in a way that was salutary. People, he reasoned, could be enticed, lured and ordered to do many different things. The challenge for the elite in charge of the economic system was to find the course of action most beneficial to citizens… and to themselves.

“Policy should direct people where they ought to go,” was one of his famous dicta.   Give them a bottle of vodka or seven years in a gulag. That will help make up their minds,” was another.

Unfortunately for Pavlovovich, Stalin appeared to have decided that he didn't really need this economist's opinions and had him assigned to the German front in the winter of 1941.  There, incoming Panzer troops were even less fond of his ideas than Stalin and he met his untimely demise.

The similarity to Janet Yellen's own views, as well as those of every central banker we can think of, is obvious.  The whole of Quantitative Easing to Infinity has been to give us that choice of the vodka or the gulag.  In the central bankers' minds, it doesn't matter that the average borrower has more debt than they can live with, it just matters that they need you to keep borrowing.  Get drunk and borrow!   It's better than a deflationary death spiral! 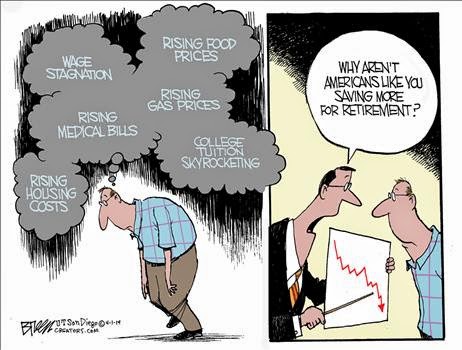 As the Fed tries desperately to raise inflation (and are succeeding) the central bankers live in morbid fear that if we consumers don't see prices rising badly enough, we'll save our money and not take on as much debt.  To you and me, seeing prices going down would make us feel better; less like the "typical, middle-class American" in this Steve Breen cartoon.  But to central bankers, you and I being able to successfully save for retirement or life in general is the death knell of their control.  Savers simply must be destroyed.  Omelet; eggs; you know.  You're the egg.