Two months ago, I ran a piece on Windows 10 and how it spies on everything you do.  Briefly, it's the embodiment of the conventional wisdom about the online world: if something you're using is free, you're what's being sold.

Now comes word from Microsoft that Windows 10 will graduate from being Nagware - that daily popup box we get offering 10 - and become a "Recommended" update:


Early next year, we expect to be re-categorizing Windows 10 as a “Recommended Update”. Depending upon your Windows Update settings, this may cause the upgrade process to automatically initiate on your device. Before the upgrade changes the OS of your device, you will be clearly prompted to choose whether or not to continue. And of course, if you choose to upgrade (our recommendation!), then you will have 31 days to roll back to your previous Windows version if you don’t love it.

I'm a bit torn on doing an upgrade.  I'm certainly not anti-technology and over the thirty-ish years I've been running a PC of some sort, I've tended to update OS not too long after the current one came out.  With Win 10, I don't know if this box will run it reliably and I sure am reading mixed comments on it including well-sourced reports that some of the big sellers' tech support lines are telling customers to uninstall it and go back to 7 or 8.  Unfortunately, the privacy issues aren't that simple to resolve.  In that September piece, I pointed out:


...there are also reports (another) that some of the Windows X tracking tools are being pushed into the automatic updates that Windows 7 and 8 users are getting, too.  They've changed the "Terms of Service Agreement" for their Windows Store and given themselves the right to sniff you're computer's butt to detect and uninstall any pirated first-party XBox and Windows games you have installed.  They even claim the right to disable “unauthorized hardware peripheral devices”.  While I don't play games more modern than Freecell and wouldn't be affected by that change at all, I'm a bit put off by the "unauthorized hardware" statement.  How would my OS know if my hardware is authorized and what does unauthorized hardware even mean?  If I have it, I either bought it or traded for it: either way, it's mine.  What exactly are they talking about and what exactly are they going to do??

The problem with Windoze is that it's the 800 pound gorilla of the OS world.  More stuff is developed for Windows because more users are using Windows because more stuff is developed for Windows...   I have a couple of programs that appear to require Windows: Mathcad, Rhino, my 3d design program and Deskproto, the CAM program that creates tool paths for CNC.  The design program now offers a Mac version; the CAM program is Win only.

It's not like there are lots of options to Windows.  There are several robust, well-established versions of Linux, but none of those three programs run under Linux.  There are Windows emulators and virtual machines, but those options expose you to the same risks that running Win 10 does anyway.  A Mac is a possible alternative, but fewer programs are available for the Mac OS machine - which I'd have to buy. Virtually all of the software I use day to day is available under Linux, or there's an equivalent Linux program I could run.  It's these few programs that are keeping me trying to find better ways to implement them.  A possible backup/plan C would be to move this Win 7 box to be firewalled off the 'net, and keep it just for running those programs.  Then I could get a simple box running Linux to do my day to day stuff that, none of which requires Windows.

It ends up being a very tedious and involved decision.  I suspect most people will just get Windows 10 and either fight through the "45 pages of policy documents and opt-out settings split across 13 different Settings screens and an external website" to turn off the monitoring, or ignore it and pretend it's not there. 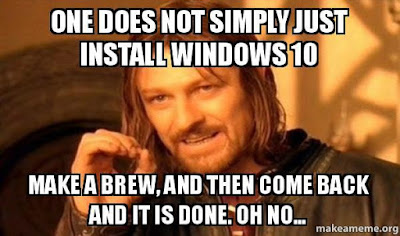