It's A Dark and Sad Day

I just got in from the day in Orlando at the annual Hamcation over there, to see the news of Justice Scalia dying in his sleep.  Of course, the dual-headed power party in DC immediately went into full tizzy mode about replacing the pivotal man in the 5-4 decisions that went in favor of liberty.  The stupid party appears to have the upper hand here, if they want to push it.  They can block any Obama appointment in committee thanks to the majority they hold, and they can keep the Senate in session until 2017 with no recesses whatsoever, denying the president a recess appointment.  All they need is just a tiny particle of backbone.  Yeah... I know.  At least weepy's not there.

One of the first positive recollections I had about Justice Scalia was that he took Justice Elana Kagan shooting.  The story gets better: that link was to my coverage of a story in 2010.  In 2014, they went hunting together.  This was kept rather private; I only found mention of it in one blog in the Wall Street Journal archives, but apparently Scalia took the ideologically opposed Kagan shooting and helped her get sufficiently interested in shooting that they'd go hunting together!


“She shot some quail, and she shot some ducks,” Judge Pickering told Law Blog, reached by phone on Wednesday. “We had a great hunt.” 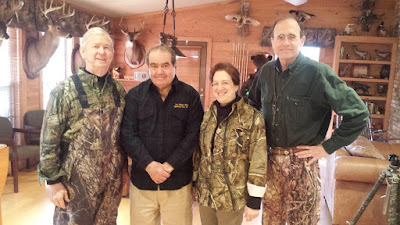 Unfortunately, Justice Scalia's passing isn't alone for us this weekend.  A longtime friend passed away unexpectedly yesterday at noon.  He was one of the first folks I met at my previous job at Major Southeast Defense Electronics Company in late 1987.  We only worked together a couple of times, but about 7 or 8 years later I found out we went to the same church and we started spending more time together.  A terrific guy.  In a prior career he had worked for some of those three letter agencies we're not allowed to talk about, and he had some wild and funny stories from all around the world.  As those guys always seem to!