John Robb at Global Guerrillas takes a break from his fascinating fare of bot net wars and analyzes why Donald J. Trump keeps winning.  It's an interesting piece, if politics from the 30,000 foot level interests you.  (To my new readers, I've said many times that day to day politics disgusts me, but when viewed from a distance it has some interest.  Day to day politics is more like cleaning out the cats' litter box: it's a nasty, disgusting job, but if you don't do it, it only gets more nasty and disgusting.)

Robb, in turn, quotes Bill Lind in The American Conservative on "Failure as a Way of Life".   In itself, that's worth reading.  Lind opens with a sentiment that I think is common knowledge out here in flyover country but seems to just be sinking in to the political classes:


"The fault line in American politics is no longer Republican vs. Democrat nor conservative vs. liberal but establishment vs. anti-establishment. This is an inevitable result of serial failure in establishment policies."

He goes on to present case after case that establishment politicians don't care about failure.  If they promote the F-35, for example, it doesn't matter that it's a bad fighter.  All that matters is that it brings favors to them and jobs for their district.  The F-35 is a horrible fighter, but they'll never have to fly it. So long as the money keeps flowing, all is well.  His trenchant observation is:

Returning to John Robb, he then flows this observation into a good overview of this year's election:


"From the start, Trump targeted the (mostly) white working class, which happens to be 40 percent of the country. And he’s done it not just with issues, but with how he talks — the ball-busting, the “bragging,” the over-the-top promises...

But it speaks volumes — whole encyclopedias — about the ignorance of our political and media elites that they’re only now realizing that much of what Trump’s been doing is just busting balls.  It’s a blue-collar ritual, with clear rules — overtly insulting, sure, but with infinite subtleties. It can be a test of manliness, a sign of respect, a way of bonding and much more.

America hasn’t been great for the working class for decades — which is why “Make America Great Again” is a great slogan for a guy who’s talking tough on the problems that blue-collar Americans (and more than a few middle-class folks) see as killing them."... from Donald Trump has Invented a New Way to Win Mark Cunningham

Clearly, Trump has tapped into something: the anti-establishment sentiment that's rampant in the country today.  In a poll a few months ago, 62% of self-declared Republican voters said they felt betrayed by the folks they elected into the establishment (not realizing these people were running to be someone, not do something).  It's not a one-off result.  After Saturday's South Carolina vote, 53% said they felt betrayed, and after New Hampshire, 50% said they felt betrayed.  The party can try to say it's nothing, but betrayal is an enormously strong feeling and strong motivator.  Simply: betrayal cuts very deeply and people who feel betrayed might well go to armed revolution.

I believe this is why Ted Cruz as adopted the slogan TrusTed - printed in two colors to emphasize his name.  He's loudly declaring, "you can trust me not to betray you".  And that's the reason why Trump's campaign has attacked Ted as being dishonest.  They know that trust is extremely important to Ted Cruz' supporters and if they can break that image of trustworthiness, they can ruin Cruz' chances.  And that's why I think it was mandatory for Ted to fire his campaign communications manager after a bad tweet.  When you're being hammered over honesty, you have to look aggressive when a wrong statement is made.

More than others, and perhaps because of his role as media "star", Trump seems to understand the whole social media world and the impact of the internet and it's "TL:DR", nanosecond attention spans.  Anything that happened a few days ago scrolled off the top of the screen and winked out of existence.  His bombast, the bragging, the conspiracies--it's quintessential Internet.


So he pops off and then lets it go--which his supporters fundamentally understand.   When opponents and media pull up a tweet from 2012, literally no one gives two shits and it only ends up reflecting (poorly) on the person pulling up the tweet.

What Robb doesn't talk about is the dark side of Trump's supporters.  I can't and won't blame their behavior on Trump, but there were reports out of South Carolina of Trump supporters physically harassing door to door workers for other candidates.  It was reported that women were afraid to go do their campaign work without guys around for security and one guy alleges being run off the road by a Trump worker's truck.  Trump's support has the air of a cult of personality to it, and that's bad. After all, it's how we ended up where we are.  A "right wing" cult of personality taking the place of our current "left wing" cult of personality is no trade I want to make. 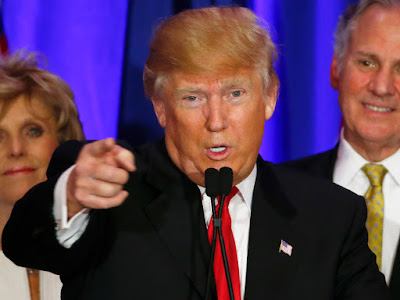