I've always thought that hurricanes were a kind of disaster that's easy to live with.  Every place has its natural disasters, and hurricane country seems to me to be a better place to live than tornado alley or earthquake country.  I'm sure there are exceptions, but I've never experienced one, to the idea that hurricanes always give you tons of warning.  I was watching Matthew for at least a week before we had to prepare.  We could have picked up any needed supplies at least that far in advance.  We could have put up our shutters last weekend if we wanted.  By contrast, you know there's a tornado season if you live in tornado country, but you may get five minutes warning.  With earthquakes, you know you're going to get one when things start moving.  With a hurricane, there's no reason to play that common, last minute rush game.  There's no reason to wait until the warning flags are up to go line up for plywood at Home Despot or wait for water at the grocery store; buy that stuff before hurricane season and put it aside.  It's the lazy man's disaster in the sense that there's nothing that absolutely needs to be done by the time they post warnings.  Everything can be done at your leisure in advance.

The fact is we're not going to get any more warnings than we've already gotten that the western economies are in the path of an approaching financial hurricane.  Metaphorically, the hurricane warning flags are already flying.  There will be no warning siren five minutes before the banks close, you'll just go to use your ATM card to buy gas or groceries and the store won't accept it or it will bounce when they try to process the transaction.  Lots of us have had the experience of going to the gas station and finding we can't use the credit or debit card because "the machines are down".  Ordinarily, you go to the next gas station down the road or wait until the machines start working.  What happens when all of the networks go down; all of the machines go down?  Nothing is available unless you have cash, and then sellers will ask whatever they want to ask.  It will be the start of panic.

Two days before Matthew, people who live along the beach were told there was a mandatory evacuation coming the next day.  Some people left early.  I've heard of ATMs being out of money.  What will happen if everyone hits their bank and they run out of cash?

You've probably heard a lot about the troubles at Deutsche Bank (example), but they're not the only big bank in trouble.  When the next financial crisis occurs, it will be suddenly and without warning.  It will almost certainly follow the collapse of a big bank like Deutsche Bank, which will be followed by a stock market dive.  Almost no one would understand what caused it. Almost no one would be prepared for it.  No one would know how long it will last.  No one will know what the world will be like when it's over.  It will be worldwide and inescapable.

Janet Yellen and her fellow central bankers would try to reassure us they understand everything, but they don't.  The central banks have blown trillions of dollars into an equity bubble on Wall Street.  Estimates go upwards from $30 Trillion dollars disappearing in a short period, like one week.  But that's not the worst case possibility; if the bond market collapses it could take another $70 trillion with it.  Sure, they can throw a few hundred billion dollars at that, but are they really crazy enough to try to digitize $30 Trillion?  $70 Trillion? It has been speculated that the International Monetary Fund (IMF) will be the only group left in the world with any money: their Special Drawing Rights (SDRs)  The problem is that SDRs aren't really money: they're more like a promissory note.  They're a claim to currency held by an IMF member nation.  What if they need more money than they can get?  What if they need more money than the GDP of the planet?

I've beaten this horse for years here: the market is not fine, the economy is not fine, inflation is not the 2% the Fed claims and essentially every statistic you commonly come across is bogus.  The Fed blew the bubble in the stock market and it is going to burst, like all bubbles do.  Nothing has been done to fix the root cause of too much debt in the system, and we're reaching the point where the storm is getting ready to hit. 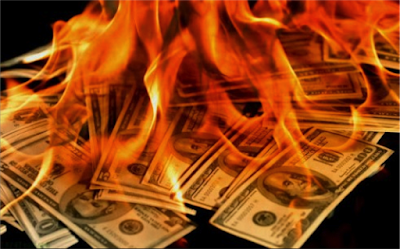