Let Me Tell You a Crazy Theory

I've been thinking about this for a while, and while I'm not sure I believe it, I think it's in the realm of possibility. I thought I'd run it by you.

Let's start with the Federal Reserve.  While I think they're so bound by their models for Keynesian stimulus programs that their blinders won't let them see any other answers, I don't think they're idiots.  They just don't have words for what they're seeing because it's impossible in their models.  Therefore they have to know that for some reason, their creation of $4 Trillion dollars hasn't really stimulated the economy.  At this point, it has to be dawning on some of them that creating debt to get out of debt isn't a winning strategy.  They have to know on some level that all their lies about the economy being healthy and inflation being nearly zero are just that: lies.  They have to know they're building a house of cards, now taller than the Empire State building, that's going to come down in the slightest breeze.

If untrained lay people like me (and about a zillion others) can see the economies of the west are heading for collapse, they have to be able to see it, too.  So imagine that Yellen or someone from the Fed tells the POTUS that they just can't hold back the flood too much longer, and the dike is going to collapse.

What if the Democratic Party leaders got together in one of their covens and said, "look, the economy is going to collapse within the next four years.  Let's get the worst candidate the world has ever seen.  The Republicans will win, the collapse will happen, and everyone will blame them.  If they use our argument about everything being Bush's fault and blame it on us, we can get the media to show how stupid that is.  No Republican will ever be elected so much as dog catcher ever again."..."But who can we get that's so bad anyone can beat them"... "Get Shit For Brains Clinton".  I think the leaked DNC memos showed conclusively that the Hildebeest was selected, and it didn't matter what the voters did, with the super delegates and all (as well as the DNC memos getting Seth Rich murdered).

The Republicans put up a good field of candidates who ran the gamut from the really good, strong constitutional conservative Ted Cruz, to other strong candidates like Rick Perry, Scott Walker and even Carly Fiorina, all the way to a circus clown, um, reality show host.  Said reality show host became the personification of the "F**k all y'all" vote and took everything early.

We've all seen the pictures of the Trumps and Clintons socializing at some wedding.  Are they really friends or are they the "have your people call my people" kind of friends?  You could make the argument that he ran to help her win, but I'm not going to.  I think he got into it on a lark.  Not that it matters.

I think we're in a weird situation where some elements of the DNC wanted to throw this election and keep their status quo positions in the ruling class.  Donald Trump entered never thinking it would come to this.  Queen of Corruption Clinton is thinking she's the hottest thing to hit a campaign trail since The One Itself and can't figure out why she isn't 50 points ahead.  Trump suddenly sees that he's neck in neck with the establishment and has a real chance to become the most powerful man on Earth.

To summarize it in a nutshell, the Evil Party tried to throw the election by getting the least liked, least capable candidate they could come up with.  She doesn't know that's why she's there.  The rank and file party, media and the rest don't know that's why she's there.  The Stupid Party's voters are so sick of the party's duplicitousness that they wanted the biggest outsider they could find.  If either of them was clearly better than the other, this would be all over but the shouting. 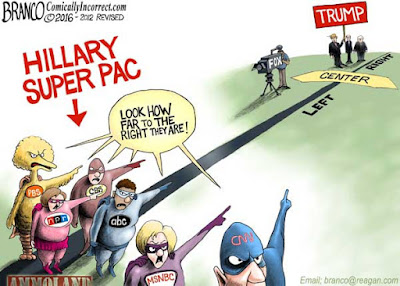