We arrived back home at the Silicon Swamp a bit after 1:30 this afternoon, and while it was a busy day even only being here six hours so far, I thought I'd post a few pictures.

Let me start with one of my favorite phenomena.  Back in March, in a post about preparations, I posted pictures showing how pinholes don't have to be formal thing.  There's a pair of photos in that post, one showing seven little images of the crescent sun using a Ritz cracker as the pinholes; the other photo shows dozens of images from using a colander.  In the field, you find that every place light shines through (most commonly) leaves, those little openings behave like pinholes, and you get dozens of images of the crescent sun, like this photo of the shadow from an ornamental plant. 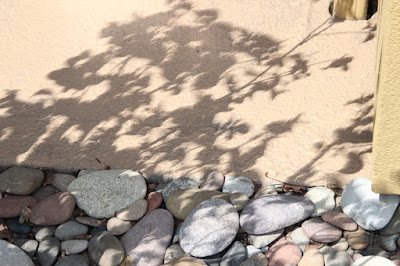 There are so many, it's literally hard to see them.  Look right around the center of the picture and you'll see a crescent sun.  Then as you look, you'll see plenty more.

And it doesn't have to be leaves.  You can hold out your hand in an "OK" sign and gradually shrink the size of the hole until you see the shadow surrounds an image of the eclipse.  It's not hard.  We taught Precious Grand Daughter how to do it and she's 5.

As I said, as we went into the last moments before totality, all the city lights turned on. 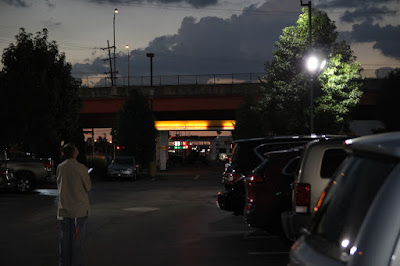 This isn't a bad depiction of what the light was like.  In the center of the pic is an elevated roadway, and below that the yellow lights of a Shell gas station.  You can see a row of all sorts of signs turned on as well as a few streetlights.  At a sunset, the sky is lighter in the direction of the just-set sun, darker in other directions.  The horizon was sort of light in every direction.  Considering the width of the shadow and our proximity to the center, that light couldn't be from physically seeing the edges of the sun's shadow, it had to be an optical effect.  The light on the clouds looked like the light from a full moon. 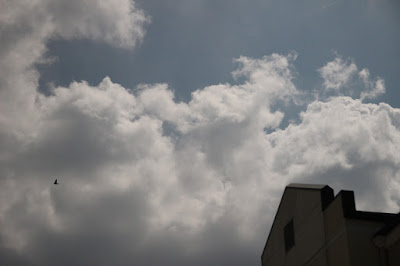 The highlight, though was the corona.  At this point, it would have been nice to be in a lawn chair so we could lie down and just stare at it.  It was 1:28 local time, which with Daylight time translates to almost solar noon - the sun almost directly overhead that was a bit rough.  My photos didn't turn out as well as many I've seen online, but I was deliberately following the advice of a photographer I read saying, "watch your first solar eclipse; photograph your second".  Go look at McThag's and Denninger's. 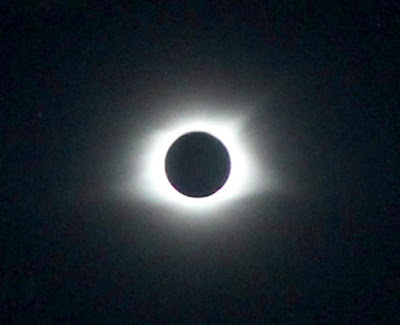 This is deliberately over processed to try to tease out some details in the corona.

As many have said, totality itself tugs at something deep and fundamental in us.  Perhaps because it's both familiar in resembling an approaching night yet jarringly unfamiliar as that night turns into something quite alien.  Words simply do not do it justice.  I can see why primitive peoples would be completely freaked out by it.  Likewise, I can see how photographers would start following these as a long term hobby/obsession.

Son, Dear Daughter-in-Law and Precious Grand Daughter met us there.  While we drove about 13 hours over two days, they live about five hours north.  DDIL made essentially all the arrangements for our June vacation in South Dakota; this time I did.  I found the viewing place, made the initial room reservations, bought solar glasses and filter material, and assembled the filter for the telescope.  It was a bonus for us to share this with them.