It's Time to Rename the Grail Gun

It's time to rename the Grail Gun (references and stuff) and do an official Christening.  I'm thinking its name should be "The Precious".  I suppose I'm open to better ideas.

We had planned on getting up a little before 6AM, which gets us to our club range with enough time before it opens to let us get some targets placed and be ready at the appointed hour.  When we got out of bed it was overcast and had been raining off and on all night.  The forecast was for the rain to be ending and stay offshore all day.  So we went anyway and it stayed (blessedly, gloriously) cloudy all morning.  The sun didn't come out and it didn't even get above 90 until after we left around 10:30.

In the intervening two weeks since my last report, I had decided to re-zero the scope at 100 yards instead of 25 so I started at 100 yards.  Everything went exactly the same as last time.  With the cross hairs at the very bottom of the target, the POI was about 8" above that.  My Nikon says "1 click = 1/8" at 100 yds" so with 8 clicks to the inch, I counted 48 clicks and lowered my point of impact by 6".  As a long-former coworker used to say, "prediction is the essence of science".  Then I put the crosshairs on the center of the target and watched the shot come in about an inch high.  No mysteries.  Clicked it down another eight or 10 clicks and again, it moved as expected.  I was finishing a box of Hornady Precision Hunter, and grabbed two shots carefully placed.  My SubMOA phone app tells me they were 0.31 MOA; just barely touching holes.

Precision Hunter uses a 143 Grain Hornady ELD-X bullet, but it's not "match grade" ammo.  I had half a box of 140 gr Hornady ELD Match and switched to it for this 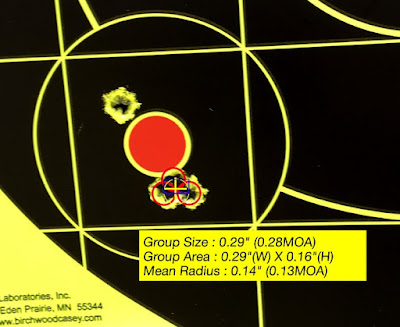 That's a three shot group.  Marginally better than the Precision Hunter.  I expected it to be better, but "more better" than that.  (Strangely, I don't see the exact box I have to show you; it's a white box while this one isn't - but it has the same description)

I decided to stretch it to 200 yards.  With the rifle zeroed at 100 yards, the Ballistics App says that 100 is the peak of the parabola and the round will drop 2.77" by 200 yards.  Reality agrees.  This is a real series of three shots at 200 yards, after a couple of rounds to get a feel for the distance. 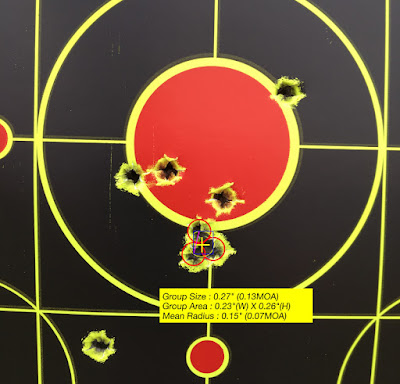 The target is kind of messy.  That group at the bottom is a set of three shots in sequence.  The hole just above those three at about 1:00 was before that string and the one a diameter farther above at 11:00 was a few minutes later, after helping Mrs. Graybeard with something.  If I include those two separated shots, I get this 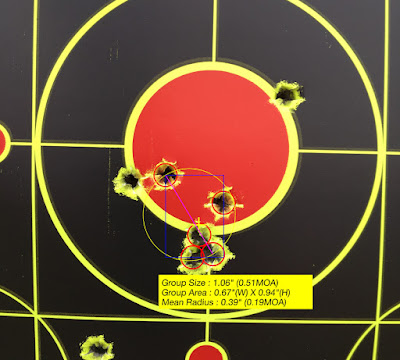 It opens up to half an MOA.  The hole to the left of the 11:00 round, crossing the yellow ring around the 2" red center, and the other hole down on the bottom of the picture are a totally different ammo with a totally different point of aim: Hornady American Whitetail 129 grain soft point, a while later.

The American Whitetail 129 grain soft point was very disappointing.  I shot a box of it.  It fell more than the heavier bullets and didn't pattern anywhere near as well.  I don't have a good picture (switched to the iPhone through the spotting scope), but it filled 1-1/2 to 2 MOA.   Also used a handful of rounds to ring a steel plate at 200 yards.

All in all, a fun couple of hours with The Precious.  Learning new skills is always fun, and I'm sure I have more learning ahead.