The internet is abuzz about a couple of books from the 1890s that were recently discovered by some Reddit posters.  Apparently because they tell the story of a time traveler named Baron Trump.

The book, "Baron Trump's Marvelous Underground Journey", by Ingersoll Lockwood, came out in 1893. It's about a boy named Baron Trump who can time travel. His next book was called "The Last President", of which the president had a cabinet member named Pence. The entire text of both booths are posted in the two links below.
archive.org/stream/barontrumpsmarve00lock#page/n6/mode/1up
archive.org/details/1900orlastpresid00lock 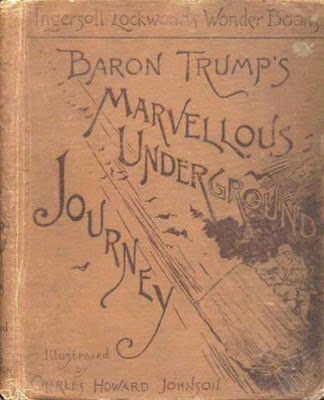 The weirdness doesn't stop there.  The narrator, the “master of all masters,” of the book is named… Don.  In the second book, “1900, Or The Last President,” the election of the new president immediately leads to street protests and violent demonstrations.


In New York City, when the results were announced, swaths of the city were placed on lockdown due to masses of violent protesters storming the area.


“Strange to say, the people in the upper portion of the city made no movement to rush out of their houses and collect in the public squares, although the night was clear and beautiful. They sat as if paralyzed with a nameless dread, and when they conversed it was with bated breath and throbbing hearts.

In less than half an hour, mounted policemen dashed through the streets calling out : “ Keep within your houses ; close your doors and barricade them. The entire East side is in a state of uproar. Mobs of vast size are organizing under the lead of Anarchists and Socialists, and threaten to plunder and despoil the houses of the rich who have wronged and oppressed them for so many years. Keep within doors. Extinguish all lights.”

And their rallying cry?

Which really sounds like it could be an Antifa rally today.  Just shows you that those sentiments never change.  Well, maybe not the part about chariots.


Another strange reference is the “Fifth Avenue Hotel. As Newsweek notes, the address in the original book is now where Trump Tower stands on Fifth Avenue in Manhattan.  [Bold added throughout - SiG]


The Fifth Avenue Hotel will be the first to feel the fury of the mob. Would the troops be in time to save it?

Right now, lots of people are saying, “but what does it mean??” and I say, “absolutely nothing”.  None of the names everyone is all wrapped up about are an unusual name, and it's not like the books are predicting “President Donald J Trump” in 2017.  It's not predicting the future in any way.  It's all just a wonderful, fun bunch of coincidences like the Kennedy-Lincoln coincidences - only not as many.