Manufacturing in the US

Long time readers may have noticed that I've often said that I worked in electronics manufacturing in Florida for my entire career - since the mid '70s - and the only constant has been people telling me that we don't manufacture anything in the US.  In the 70s, most of the TV stereo and other consumer electronics pretty much vanished in the US, with Japan being the place everyone talked about.

What happened, though, wasn't that manufacturing shut down; it shifted to higher margin products.  TVs and mass-production stereos are low margin products.  Amateur gear, for example, was higher end.  It came under intense price competition from the Japanese companies, the so-called Big Three of Icom, Kenwood, and Yaesu, but high end ham gear from RL Drake, Rockwell Collins, and others continued to be made in the US long after most consumer electronics was overseas.  There are still a host of smaller companies in America making and selling ham radio gear  - along with high end audio gear, commercial radios, and all sorts of products that aren't amenable to turning on a production line and shipping millions of units.

I started my career at a company that made measurement and control peripherals for other manufacturing companies.  They eventually sold these peripherals into the nuclear power industry.  As such, they stressed ultimate reliability, and high-end, high-reliability electronics is the backbone of American manufacturing.  I worked there six years.  After that, I worked in DOD aerospace systems for a contractor for 13 years, followed with 20 at Major Avionics Corporation.

The point of this isn't to show off my 40 years in electronics; it's to point out how, despite the constant claims of the death of manufacturing America, there's a healthy electronics manufacturing sector in the US that's doing fine.  There always has been and always will be a constant struggle to increase productivity - to always do more with less - but the sector is fine.  Taken by itself, US manufacturing is the 9th largest economy in the world.  That is, the manufacturing sector in the US produces more than the GDP of all but eight countries in the world (one of which is the rest of the US).

We're hearing a lot about this on the news these days, as an undercurrent to the chatter about North Korea.  We can't put a pressure on China, the pundits say, what if they start a trade war?  We'll have nothing in the stores!  There would be a period of adaptation, but the profit motive is strong and I have no doubt things could start flowing.

The National Association of Manufacturers is the trade organization that gathers data on the manufacturing sector.  Let me share a few bullet points.  There are more on the NAM website - and I've edited these to try for a little brevity.
I think that the revolution in small scale manufacturing that I've talked about many times is going to play a part in the growth of manufacturing over the coming years.  It's the new industrial revolution.  Interpreting the second bullet point that, "The vast majority of manufacturing firms are quite small," works out to almost 189,000 manufacturing firms with fewer than 20 employees.  That number of firms is going to skyrocket as people who might never think of having a product find ways to develop and make things that others want.

I think that the most common manufacturing facility is going to look a lot less like a big car assembly line and a lot more like a Makerspace.  Or hobby machine shop. 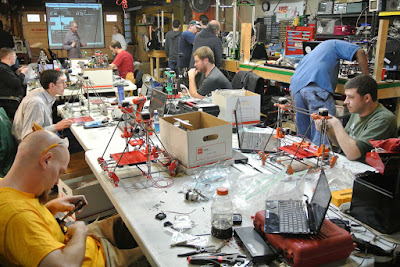