It's one of those "you can't make this stuff up" kinds of stories.  German and American researchers want to use the hormone oxytocin, a female hormone said to foster nurturing and bonding between mother and child - "turning mothers into moms", to make Germans less hostile to the Muslim immigrants invading their country and raping their wives and daughters.


A group of researchers from Germany and the United States claims to have found at least a partial cure for xenophobia, a much heralded accomplishment in the wake of a historic migrant crisis that has swept more than 1.7 million Muslim refugees from the Middle East and Africa into Europe’s cities and led to fissures in social cohesion that some predict have sewn the seeds of civil war.

It's not exactly clear how this would be accomplished; whether everyone would have to be dosed with oxytocin on camera or in a monitored facility, but the study is more "proof of concept" than a plan of how to implement it.


According to the researchers, the hormone drug oxytocin administered in combination with peer influence caused people inclined to have “negative attitudes” toward migrants to actually want to reach out and help them.

“Researchers have shown in a new study that the bonding hormone oxytocin together with social norms significantly increases the willingness to donate money to refugees in need, even in people who tend to have a skeptical attitude towards migrants,” the study concluded.


People who had “negative attitudes towards migrants” were not affected — but, when they were shown how generous others had been towards migrants in combination with the drugs, they “donated up to 74 per cent more”.

In my mind, it's kind of reminiscent of Nazi medical research like that done by Josef Mengele, giving people drugs to see if they'll do what the state wants them to do.


James Simpson, a journalist who has also written extensively about the dark side of refugee resettlement, was taken aback by the study.

“This reveals a deeply entrenched official agenda to push refugee resettlement at all costs and thoroughly discredit any and all opposition to it,” Simpson told WND. “It reinforces my belief that official Germany is carrying out the Russian plan to take over Western Europe using the refugee crisis to create chaos. Chancellor Angela Merkel is the Russians’ agent-in-place – a member of the East German Communist Party before coming to the West who inserted herself into West German politics by pretending to be a pro-West moderate leader.”

Like I say, you just can't make this shit up. 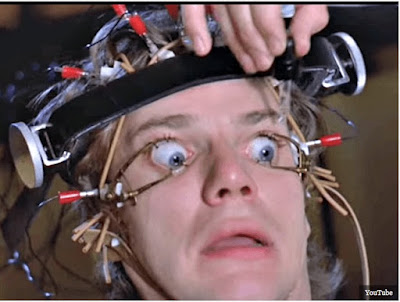 Maybe "A Clockwork Orange" was more prescient than we thought.

Labels: big freakin' out of control government, commies and other idiots, eemigration