Things to Keep An Eye On

It's that time of year again.  September 1st is this Friday, and September brings some things to keep a wary eye on.  The significance of September is that it's the last month of the government fiscal year, and because of that, stock market corrections tend to come on September 30th, plus or minus one month.

Before the end of the fiscal year, we're going to go through the debt ceiling theatrics we have to go through periodically.  New readers: let me tell you something all my long term readers know: it's a show.  There is no debt ceiling.  I mean, there's technically, legally a debt ceiling, but since it has never once in history been lowered, not even held as fixed cap, but always gets raised, you can ignore the "sound and fury signifying nothing", you can ignore the government shutdown kabuki theater, and know it's just a show so they can appear important.

If you look at market indicators of all sorts, red lights are flashing that something bad is coming.  The CAPE ratio, the Cyclically Adjusted PE Ratio, is the third highest it has been in history.  The highest was just before the Dot Com bubble popped in late 1999, and the second highest was right before the 1929 crash that led into the Great Depression (which would have just been a milder, plain depression without Roosevelt's and the still-new Federal Reserve's meddling).  It's in very bad territory. 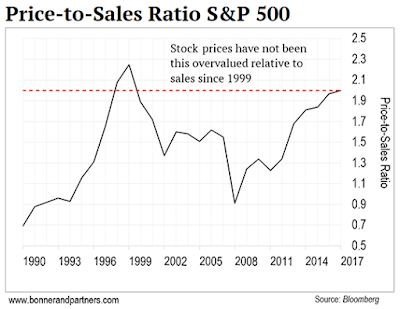 Small company's stocks (smallcap stocks) are more expensive than before the 1999 and 2008 crashes. 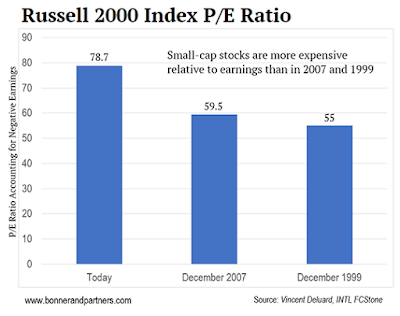 In short, stocks are at their highest prices since the dot-com bubble burst.  Yet the underlying economy that creates the sales that keep those companies going is weak.  It's all pumped up by the phony money created by the Federal Reserve.

Railcar traffic, a sign of goods moving around the country to customers, went through a flurry of activity after the election but has been declining since March.  We're entering the fall, when the retail stock pipes should be filling with merchandise for the holiday sales. 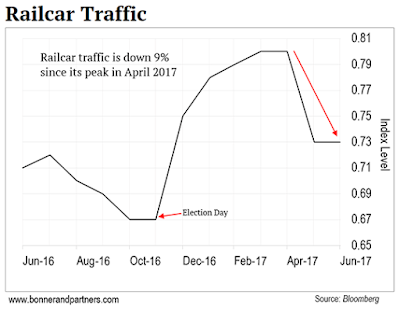 Phil, over at the Vulgar Curmudgeon, posted a link to a story on BloombergMarkets that major banks are warning that the current market highs and the "post 2008 recovery" may be getting ready to reverse.


HSBC Holdings Plc, Citigroup Inc. and Morgan Stanley see mounting evidence that global markets are in the last stage of their rallies before a downturn in the business cycle.

Bonner and Partners developed a "Doom Index"  to assign actionable values to a handful of things as a warning to coming market crashes and corrections.  It's flashing a "soft warning", that trouble is possible.  That was a month ago, before the subprime auto loan crisis was fully recognized and talked about.  I don't have an updated value.

So is the market going to crash in the next few months?  Here I'll quote Bill Bonner, since his words could almost exactly be mine.


We’re no better than anyone else – and perhaps worse – at telling you when the next crash will come. Or even how. But that it will happen… we have no doubt.

And when it does, the loss – judging by similar events in the past – is likely to be more than 50%.

Worse, the loss could be almost permanent – as it has been in Japan.